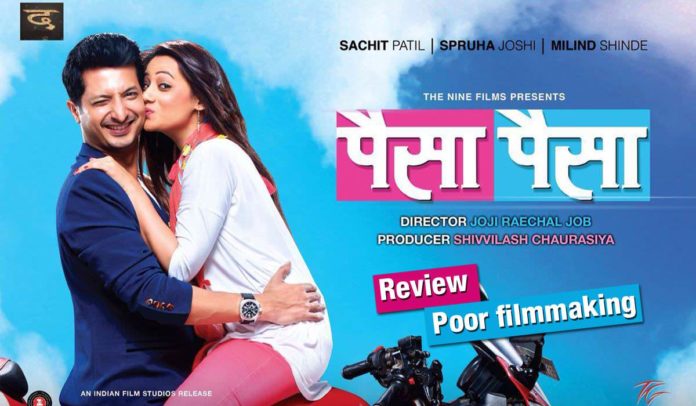 Remakes are quite popular today. Nearly all Salman Khan hits in the recent past have been remakes of South Indian masala potboilers. With the aim to replicate the success of Hindi cinema, marathi producers too have started remaking films from the South, dime by the dozen. Interestingly, none of them have been lapped up by the masses of Maharashtra, but a rooted Sairat is being celebrated. Paisa Paisa that has released today is another remake.

Paisa Paisa is not a potboiler, though, and is a remake of a Malayalam film by the same name. Marathi cinema has had remakes of Malayalam cinema in the last few years, like Classmate and Shutter. Both of them have some substance and you can understand the motive behind the remakes. But here the original script itself is so weak that one wonders what were the people behind the production of the marathi remake of Paisa Paisa thinking.

The basic premise is fairly interesting: A filmmaker gets a phone call saying that his friend has been kidnapped. A ransom of Rs. 10,000 is to be paid in 2 hours. The film then goes on to show us how the filmmaker played by SachitPatil goes around trying to arrange the money. And all of this happens in real time.

The plot certainly has potential of making the film engaging. But you will have to see the film to believe what a poorly written film it is. First of all, the figure of the ransom is hilarious. SachitPatil’s character looks well off and certainly feels capable of arranging the required money in such a dire situation. But shockingly not only him but many other of his friends and acquaintances are also incapable of giving the rather modest amount.

Also, mostly, nothing really happens in the film. Rather the same thing happens over and over again. A single plot point gets repeated again and again and the film gets on to our nerves.

The film also doesn’t feel like it is happening in real time.

Paisa Paisa is a poorly written film that makes you wonder why it was remade in the first place!