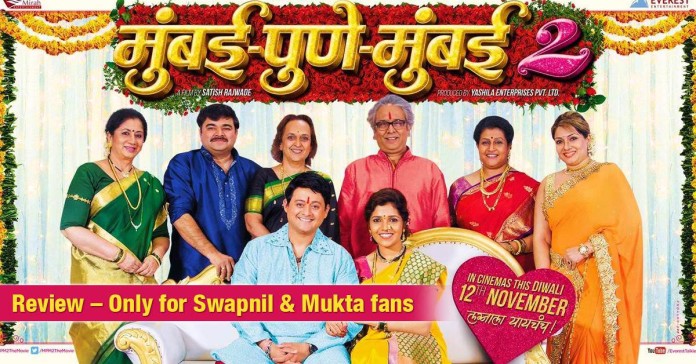 It is normal to have high expectations from the sequel of a film as loved as Mumbai Pune Mumbai. But it is almost impossible to recreate the magic of something as great as the 2010 film.

At the same time though, one would, at least, expect a decent amount of satisfaction from Mumbai Pune Mumbai 2. Unfortunately, that doesn’t happen. Although the film has enough elements for the target audience and the fans of two lead actors, it falters on the story level. 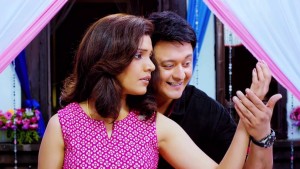 Mumbai Pune Mumbai 2 continues from where the first film ended. Gautam (Swapnil Joshi) and Gauri (Mukta Barve) are deeply in love with each other after spending a day together. Hence, they have decided to get married. Even their respective parents are very pleased with the alliance. Both families share an excellent rapport.

Soon, Gautam and Gauri get engaged. However, in the midst of such positivity, something out of the blue takes place, which threatens to tear the happy couple apart. Will their love succeed in standing tall against such testing times? Or does their love lags behind in something?

There is no doubt that Mumbai Pune Mumbai 2 is made by keeping the family audience in mind. The film succeeds in this task till some level. There are enough family moments in the form of lighthearted conversations and scenes where characters are excitedly preparing for an important marriage. Swapnil and Mukta’s pairing is obviously plus factor. Avinash-Vishwajeet’s music too tilts towards the positive side. ‘Saath De Tu Mala’ is the best of the lot.

Mumbai Pune Mumbai 2 is by far the first sequel that has a completely different theme from its first film. But this is not a problem here. The problem is the main point that takes the story forward. It is just unconvincing and it also makes one of the two characters appear silly. It is impossible to ignore this point because the entire film is based on it. And its consequences and the culmination (which is anybody’s guess) too are far from satisfactory. 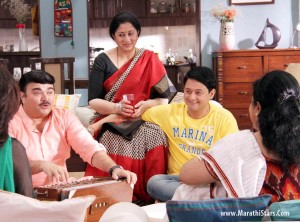 Although the content doesn’t give much of a chance for the DoP to experiment, he has done a fair job. The story does appear more like a daily soap. But, thankfully, the background score doesn’t give that soapy feeling.

It is a pleasure to see Swapnil Joshi and Mukta Barve opposite each other yet again. Both have once again come up with pleasing acts. And like always, they complement each other very positively. This time, they were required to do something very different from the first film.

The film has a host of supporting actors in the form of Savita Prabhune, Asawari joshi, Suhas Joshi, Mangal Kenkre, Vijay Kenkre and Shruti Marathe and they all have provided decent acts.

Mumbai Pune Mumbai 2 is just an average affair, which is not what one expects from the film. However, due to the popularity of the franchise and the leading pair, it will score big at the box office. The presence of Katyar Kaljat Ghusli and the Bollywood biggie Prem Ratan Dhan Payo won’t be able to stop it.