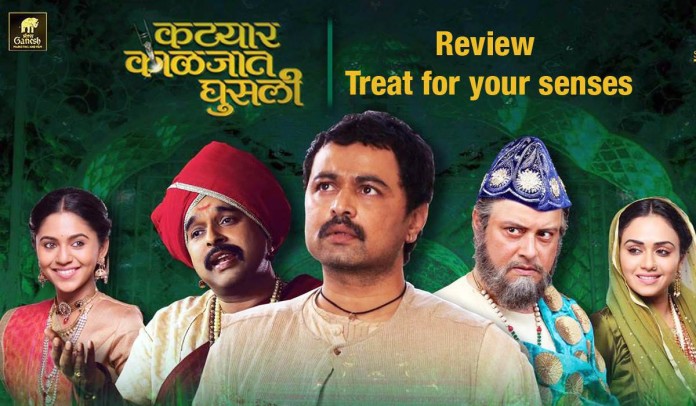 A musical saga filled with numerous outstanding songs can gain acceptance even if the overall content falls in the above-average category. But this is not the case with Subodh Bhave’s Katyar Kaljat Ghusli. The film excels in every department and turns out to be a treat for your senses.

Katyar Kaljat Ghusli is based on the Marathi musical play of the same name. The story takes place in the pre-independence era in Vishrampur, Madhya Pradesh. Pandit (Shankar Mahadevan), a master in classical singing, has been a Rajgayak at the King’s court. As a reward for being a Rajgayak, the king decides to present him a royal dagger (Katyar). 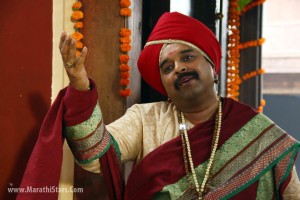 Normally, a musical film deals with subjects like romance or some serious drama. But KKG is a rare music-oriented film whose subject is a mixture of one-upmanship, betrayal and revenge. The writer has blended each of these aspects naturally with music through a intelligent, fast moving script. The duration of 2 hours and 41 minutes doesn’t appear lengthy at all. 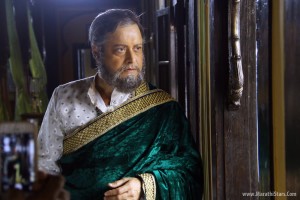 The film is Bhave’s first as a director. But he has handled the film like a pro. There is a long list of scenes that leave behind a mark. In fact, it won’t be an overstatement that his next directorial venture is keenly awaited.

Music is the soul in this genre. So, the music just has to be impressive. But what the composers have achieved here is pure excellence! The tracks lead you to a trance.

The film also triumphs in the technical aspects. You can’t help but notice the artistic abilities of the DoP. The background score and editing too are praiseworthy.

The film does have few incidents in the second half that are questionable. On one or two occasions in this half, the going gets a bit dull. 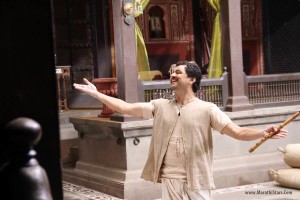 Lastly, the performances take the film few notches higher. Sachin Pilgaonkar surprises you with his brilliant act as Khan Saahab. This is easily one of his career best acts. Subodh Bhave once again excels by showing a lot of dedication.

Shankar Mahadevan makes an impressive acting debut. His acting skills are on display in the latter part. Amruta Khanvilkar, Mrunmayee Deshpande and Pushkar Shrotri are good in supporting roles.

Katyar Kaljat Ghusli is an overwhelming musical saga. The film will do well at the box office despite the presence of Mumbai Pune Mumbai 2 and Bollywood’s hugely awaited Prem Ratan Dhan Payo.