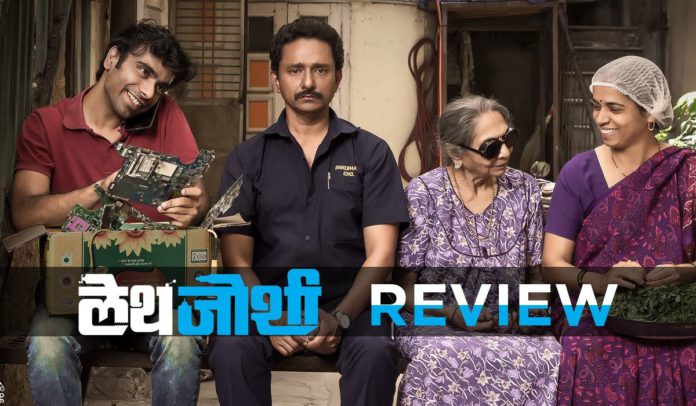 Lathe Joshi starts with a pin drop silence introducing Mr. Joshi & his ‘Lathe’ machine at work. Joshi’s boss calls for him & in the next scene we see Joshi & his fellow lathe workers sitting calmly, without discussing a bit about what happened in the boss’s cabin. Yet the message reaches us clearly. Their skill isn’t required any longer. Almost without a word spoken ‘Lathe Joshi’ tells what the film is all about & how it will approach the subject throughout the film.

‘Lathe Joshi’ lies strongly on it’s title character. His characteristics also define the treatment of the film. Mr. Joshi isn’t keen on confrontations, sometimes he seems to exist on such minimalist scale that the surroundings over power his existence. There are many scenes in the film where we see other characters not even noticing that he is there in the same space. Chittaranjan Giri’s performance is as unconventionally plain as it can get! A conventional actor with a conventional performance would have taken away much of the uniqueness from the film. One needs to understand that Joshi represents the subject of the film in & out, but the film still doesn’t exploit the character for the subject’s purpose, it makes us believe in Joshi throughout.

The film deals with the changing (or rather changed) times. Times that are scrapping out human skill, craft as redundant in the today’s highly productive & business oriented world. Every one of us has experienced this change. The idea of having an individual impact in your work place is dying out. In the larger context it applies to every employee who went through this change. We see a younger colleague of Joshi, Mr. Shinde (Shrikant Yadav) who has managed to change with the changing times leaving behind Joshi & others who couldn’t.

In Joshi’s own family his son Dinu (Om Bhutkar) & his wife (Ashwini Giri) represent this change. And Joshi’s old blind mother represents the further transition Joshi himself would go through if he doesn’t change! The change required has very little to do with learning a newer skill which could suit the new age (as Joshi’s son repairs computers) it has more to do with the principles behind the work. Joshi’s work was his identity, his old bedridden boss proudly calls him an artist. Joshi worked for that, for his boss to embrace his skill, his art! His son represents a completely different work ethic. So does his wife (who works as a small time caterer).

Both Joshi’s son & wife are working for the outcomes alone. Eating at a fancy restaurant, buying a car, & so on. Their work is just a mean to reach new destinations every day. Unlike Joshi who’s journey & destination both were in his work. As plain as all this might sound, throughout in ‘Lathe Joshi’ there are countless humorous moments! Mainly involving Joshi’s old mother & her obsession with Television (she can’t see but she can hear!). Television too is a tool of this new world. Filled with advertisements & shows that would inspire you to keep copping up with the constantly evolving world! Dinu (Joshi’s son) keeps creating small quarrels between his grandmother & mother to keep his grandmother ‘interested’. That’s all there’s left in an old person’s life who isn’t part of the rat race in today’s world! This also is Joshi’s own future.

Mangesh Joshi the director of the film deserves credit for actualizing this film without any compromises. And of course for it’s inception in the first place too! His entire technical team too deserves credit. And of course the actors! One can’t stop but mention Chaitanya Tamhane’s ‘Court’, that was the last Marathi film that truly explored the art of subtlety to it’s fullest, ‘Lathe Joshi’ too does that with great focus.

‘Lathe Joshi’ is a film that would work for an audience who wishes to be served ‘quality’ over the ‘quantity’ of usual idea of ‘entertainment’. It’s a film that is destined be talked about for years to come, for how rare the subject it chose to the treatment & the perfection it achieved in it’s execution!