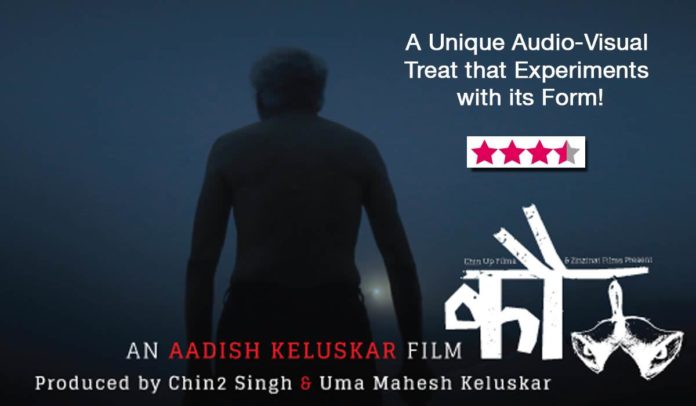 ‘Kaul’ is an act of calling god. Along the coast line of Maharashtra (Konkan) in almost every small village there are people who specialize in it. They are called Gurav (basically they are priests with lesser or almost no privileges). If anyone in the village is stuck at a crucial decision or wants to know future consequences of his deeds, the Gurav arranges a ‘Kaul’ on his behalf. Interestingly this highly experimental indie film doesn’t quite go into that act of ‘Kaul’. Instead it redefines the concept.

For Aadish Keluskar (Director), or rather for his lead character Kaul stands for a communication from the opposite end. This end could be Mother Nature or a faceless source of power. A power that has no sense of the conventional boundaries of morality, a power that makes you aware about the meaninglessness of everything around us including ourselves.

The film follows a recently married school teacher, who gets transferred to a small village in Konkan. The film doesn’t quite seek in to find the authenticity of the region & it’s culture as it’s completely focused on our protagonist’s mind which itself is as complex as a culture. Yes the school teacher suffers from issues to find solace in the world around him. Once he says to the doctor, that his life has no problems at all & everything is just fine & that really bothers him, there is probably no dream to strive for! This little prologue from the film resembles the soul of this film! He experiences few acts of super powers in that village which act as a catalyst to his situation.

The protagonist is then guided by a mystical old man who says he has been through all that the protagonist is now going through! We listen to this terrifically voiced old man who speaks the purest form of Malvani (unlike any TV Serial) through monologues combined with images that sometimes advocate & sometimes contrast the viewpoint but resembles the overall flavor of the film. Though this film experiments with the conventional style of building up a conflict & then making the characters play around it, it still builds a believable world.

It doesn’t really tell a story, it’s main focus is to let us into the state & mind of it’s lead character! There is a hint of the thriller genre in bits & parts which adds credibility to tempt some of the conventional audience. The film has achieved admiring heights in terms of the visual feel & the breakthrough work in sound recording & mixing!

However to fully enjoy ‘Kaul’ one has to get over the conventional definitions of entertainment. As their tagline goes ‘Experience is the new Entertainment’ is an essential perspective!

In the last chapter of ‘Harry Potter’ series there’s an incident when Harry is half dead & is at a strangely clean & bright King’s Cross Station. He asks a god like looking Albus Dumbledore “Is this real? Or has this been happening inside my head?” to this Dumbledore replies “Of course it is happening inside your head, Harry, but why on earth should that mean that it’s not real?” That’s what we suggest would be the right perspective to watch ‘Kaul’.

If you still aren’t convinced remind yourself of the last Indian film that explored the world of mentally ill individuals without slapstick humor. You won’t find many! ‘Kaul’ is unpretentiously sensitive towards this issue which has been naturally imbibed in it. One way it considers these people as ‘dancing to the music they hear’ & others as those who can’t hear it, in a way it stresses on our unawareness or a lack of sensitivity towards such individuals.

Kaul has an exclusive aspect that has been curiously missing from Marathi Cinema & i.e ‘experiment’. Not often we see a Indian film that really gives an opportunity to the audience to watch & experience a film in their own exclusive way.