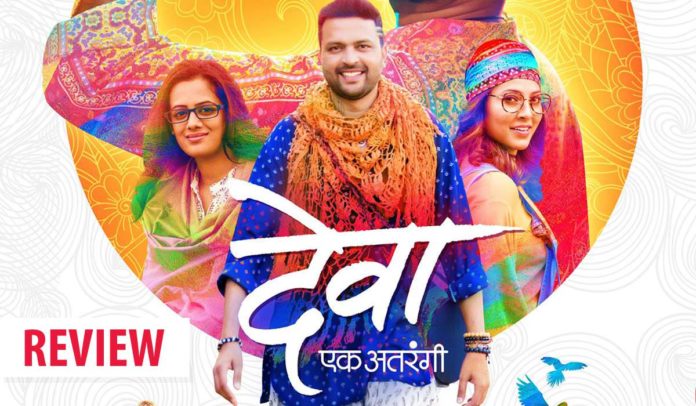 Ankush Chaudhari is without a doubt an actor of great calibre. He has a knack of playing underplayed performances with subtle perfection. He started the year 2017 on that note with his performance in ‘Ti Saddhya Kay Karte’. But every now & then Ankush is a part of a film that has been forcefully made to be a ‘commercial entertainer’ & then Ankush becomes a strangely different actor! All his subtle charm goes away instead we see his laughable antics to project himself as a ‘hero’.

That’s exactly the case with the much awaited ‘Deva – Ek Atrangi’. Ankush’s performance in the film is as tasteless & spineless as the overall film. I haven’t seen the original Malayalam film ‘Charlie’ of which ‘Deva’ is an official remake. So I can’t judge ‘Deva’ on any other terms other than its own. To me the basic plot itself is so basic & lacking the possibility of giving birth to an entire film based on it. But again there are films that have poor plots but their treatments interest us. In case of ‘Deva’ the treatment too is as horrible as the plot.

So the film starts with introduction of a famous travel blogger turned book writer (by simply compiling her travel blogs together) ‘The Maya Deshmukh’ (as one of her “fans” call her). So ‘The Maya’ (Tejaswini Pandit) has become a sensation in the world of literature (but wait didn’t she simply write ‘travel blogs’? who cares!) every publishing house wants her to write for them. But she cannot find a subject for her new book. One of her friend says come with me to ‘Konkan’ you’ll find you’re subject. A writer going places to find a subject for her book! (who does that?)

Now Maya is staying in a house of an artist who doesn’t visit his home that often. An artist who is never shown in the film creating any of his art forms, yes its ‘Deva’. He paints he sculpts but never in front of the camera. I guess he is camera shy. So in that house ‘Maya’ finds a freshly crafted ‘graphic novel’ of sorts! One that shows how Deva befriends a thief who comes at his house at night & later goes on an adventure to rob other homes with him! (why? Because he is an ‘Atrangi’!)

Slowly Maya starts finding out ‘Deva’ helps random strangers from a beggar on the streets to a doctor (Spruha Joshi) attempting suicide! Just before the interval Maya finds out that Deva is at a lodge nearby again saving a little girl from something bad happening to her. Maya runs behind him & Deva (who knows her too) looks into the mirror smiles but doesn’t stop his jeep (why?).

Post interval the film becomes completely stationary as the plot is completely focused now at an old age home of sorts made by Deva. All characters are here & they are bonding over to create some kind of drama in the film, one that never works. But Deva isn’t present. We get it ‘Deva’ is like the dumbest metaphor for ‘God’. Who loves everyone helps everyone but doesn’t belong to any one person.

But the root this film has taken to present this metaphor is an illogical mess. Every character’s action is never powered by reason. It’s simply done to add to the legacy of ‘Deva’. We are never explained why ‘Deva’ is the way he is. What is it that made him such a person? Maybe again that would be because he is a metaphor for ‘god’. But for god’s sake god needs better metaphors & better plots revolving them.

‘Deva’ is one of Ankush Chaudhari’s worst films till date. His performance too is plainly single toned. Even if you’re his fan it would be really difficult to like this film! Though you can still try if you want to!