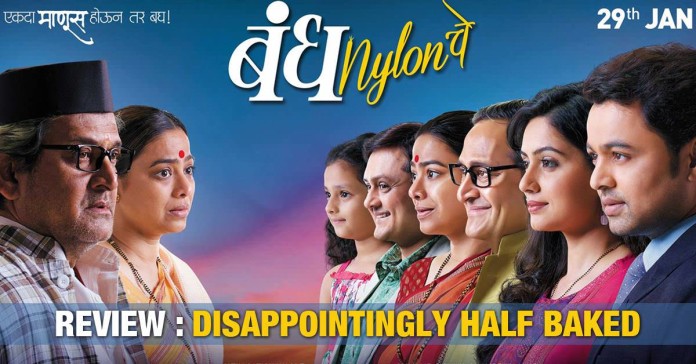 Realism many times hampers storytelling, so it is understandable if certain aspects of a film are not explained. But, a film has to be believable in the world it exists; far too many cinematic liberties make your film implausible and, thus, difficult to connect with. Bandh Nylon Che, despite having a fairly inventive plot for a Marathi film, suffers exactly from this and a few other issues as well. Devdatta (Subodh Bhave) is a self-centred man willing to go to any length to ensure his professional success. He had fought with his parents and left his home to pursue a career in the US. He has come back to India to implement a project that will go a long away in helping him climb the ladder in his career. During his stay in India he invites his parents, who live in their native place, to stay with his wife and daughter in Mumbai. But things do not work out between him and his parents, Raghunath (Mahesh Manjrekar) and Mangal Joglekar (Medha Manjrekar) and they decline his invitation mainly because of his selfish motive of someone needed to take care of his daughter Sara. But Sara is eagerly looking forward to meet her grandparents, and to avoid her disappointment Subodh contacts his friend Ravi, a scientist expert in making ‘Humanoids’ – robots that are replicas of actual human beings. To Devdatta and his wife Anita’s ( Shruti Marathe) astonishment, the humanoids not only look but also walk and talk like Devdatta’s parents.

Now, this certainly is an interesting concept, but rather disappointingly not a lot of thought has been put into convincing us of the reality of the humanoids in the world of the film. The makers of the film have attempted to create a world like the one shown in the very popular TV series Small Wonder, but the lack of detailing has made it rather half baked. The glaring logical fallacies become more visible in the screenplay of this feature length film which has been adapted from a one act play. As we struggle to make any sense of this premise, the emotional impact intended of it is also blunted. The amusement park part of the plot is also rather unconvincing; as Devdatta hardly does anything other than just convincing people to buy land. 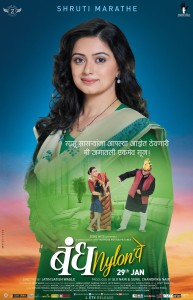 Also, the lead character is quite shoddily written and we fail to empathise with him at all. He comes across as a dark character for most part of the film and his other shades remain unexplored. Another character Ram (Sanjay Narvekar) seems to be added to just spoon feed the audience and preach them.

The few scenes between the real Ragunath and Mangal Joglekar are by far the best part about the film. Mahesh and Medha Manjrekar have a great chemistry and expertly bring across the idealistic parents who have been hurt by their rather selfish and money minded son.  Sanjay Narvekar too is impressive despite his short and oddly placed role. There is hardly anything else in the film that deserves any praise.

An interesting concept has been marred by lack of detailing and logical gaps. It does not help that the film has little else to deserve any appreciation.