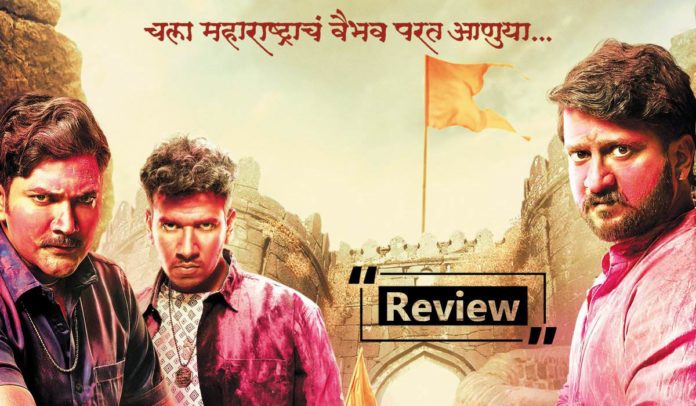 First things first, a film that actually has a tale to tell wins half the battle. Though story telling is no longer the most important element of modern cinema, it’s still a bare essential for our commercial films. That’s what the audience look for in Marathi films. They need a well-rounded story that keeps them hooked. They need familiarity, emotions, a few laughs & well an inspiring social commentary in the end. And BKMK succeeds on all these fronts to much extent.

The audiences don’t really carry any external instrument that keeps checking the logic or measures the authenticity throughout the runtime, so most of the times these errors don’t affect the entertainment quotient of a commercial film. BKMK is a genuinely well-made commercial film along with these errors.

To get that MLA ticket, Nansaheb has to pull off an extraordinary stunt. That stunt has been revealed in trailer, but we don’t prefer mentioning it. Let’s say it sounds completely silly & childish. But till that moment we are bought into this silliness. Because it’s not silly to Nanasaheb! All three of them travel to London to pull off this stunt. Do they succeed in it? Well it’s not a mystery film & we all know the answer.

The voice over that we hear in the trailer suggested this film will definitely be straight forwardly preachy. But thankfully that’s not the case. It’s not outright preachy. But it has an opinion, a very specific one, and yes it also takes sides, but all that by using characters & incidents. I wish none of the characters had surnames. The end is pretty obvious & could have been presented differently.

Aniket Vishwasrao gave the breakthrough performance of his career in last year’s ‘Poshter Girl’. He couldn’t repeat that emotional impact here, but he’s decent. Parna Pethe manages to stand out even in a less significant role! The rest (that include Akshay Tanksale, Hemant Dhome, Neha Joshi, Shrikant Yadav, Ashwini Kalsekar, Rasika Sunil, Anant Jog & Vikram Gokhale) are good too, but the soul of this film lies with Jitu’s Nanasaheb. He is idealistic, simplistic, untouched by the politics of his world, though his character should have established before the actual story starts. That could’ve increased our emotional attachment with him.

Hemant Dhome has written a few films before, but this is his directorial debut & he has done a considerably good job. The film doesn’t pretend to be anything it’s not &it’s pretty firm in what it wants to tell. All this is easier to write but difficult to execute. Dhome succeeds in the execution. The time of it’s release makes the subject & the message even more relevant.

After ‘Ti Saddhya…’ The Marathi film fraternity has brought another decent entertainer for the audiences in 2017. The ball is in now in our court! & we need to respond in big numbers!