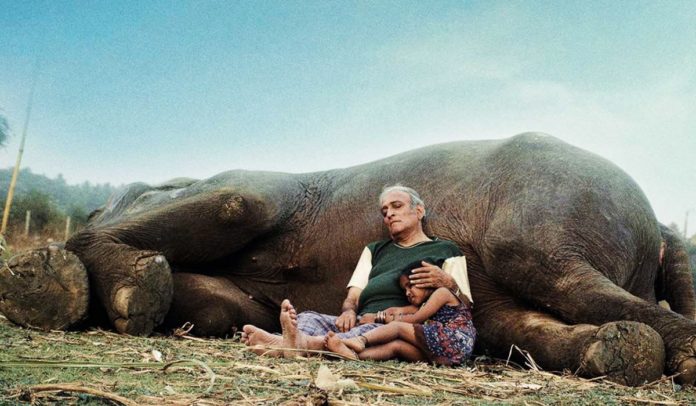 Astu is a deeply moving film with a lot of depth and meaning. And it manages to achieve all this in a rather modest manner, without being showy. In short, it is the kind of quality cinema that you have come to expect from the director duo of Sumitra Bhave-Sunil Sukhtankar.

The film is a lot more than what is apparent just on the surface. At the most obvious level it is about the downward spiral of a patient suffering from the dreadful disease of Alzheimer’s or Dementia and how it affects the people close to him. My own grandfather suffered from this disease, so I can vouch for the fact that portrayal of dementia in the film is researched, sensitive and accurate. Due to their disorientation, Alzheimer’s patients many times get lost. Research says that as high as three out of five such patients are likely to get lost.

Sumitra Bhave’s beautifully written screenplay uses this fact to heighten the drama and then through it explore a lot of themes and questions, giving the film a lot of depth. Bhave’s work on the screenplay here is truly exceptional. It is probably the most layered and nuanced screenplay after Ankhon Dekhi, in the recent past.

Dr. Shastri (Mohan Agashe) is a highly respected Sanskrit scholar living in Pune. An erstwhile Principal of a research institute, he is now afflicted with Alzheimer’s. In the beginning of the film, we see him getting lost in the bustling market of Laxmi Road of Pune, when he is accompanying his daughter (Iravati Harshe) to the market. Dr. Shastri, played by the veteran actor Agashe, gets fascinated by an elephant in the street and consequently gets diverged from his daughter. Astu then goes on to explore various philosophies in the rest of the duration of the film as we see his older daughter Mrs. Ira Pathak’s struggle to find her lost Father, and at the same time Dr. Shastri finding refuge with the family of the mahout of the elephant he is fascinated with.

Astu is enriched with a lot of ideas that force you to think. One of the recurring themes in the film is how we literate minds are quick to think and analyse. We don’t easily accept things. And this attitude isn’t of any help as a caregiver to a patient suffering from a disease with no cure like dementia.The slow deterioration of the mind of a person so close to you seems difficult to believe and accept at first. Ira does the same when her father first starts showing symptoms of the disease. In the beginning, she isn’t ready to accept that her father – a Sanskrit scholar who can, from memory,recite verses from ancient scriptures – can’t remember events that have happened a few days back or even just a few hours ago.This is contrasted with how the illiterate Channamma (AmrutaSubhash) readily accepts the strange old man wandering long out of his home and cannot even seem to remember his own name or address. It doesn’t take her long to realise that the senile old man has actually become like a baby. ‘He has become a God’, she says and takes care of him like her own child. This is most emphasised in that particularly superb scene wherein Channammais singing the most beautiful lullaby and as the camera pans we see her putting to sleep the massive elephant, Channamma’s little daughter and Dr. Shastri, all of whom she treats like her own children. Channammaa is possibly a nomad from the villages at the border of Maharashtra and Karnataka as she speaks a mix of Kannada and Marathi. It is to Amruta Subhash‘s credit that she manages to bring alive the character and create such an impact in a fairly short screen time. Kannada native speakers have also accepted the authenticity of her diction and language. Her costume and make up that includes the tattoos all over her body go to show how much Bhave-Sukhtankar care about detailing in their film.

Another theme that is touched upon in the film is the conflict between emotion and rationale. Ira – the older daughter – thinks more from her heart and cannot get herself to put her father in an asylum that she even visits once to have a look. The younger daughter Rahi, a professor at IIT Bombay, is a staunch rationalist and says that their father wouldn’t have been lost if he was put into such facility. The film is careful to not take sides here and merely presents a set of contrasting ideas that are right in their own way; putting dementia stricken person in an asylum might seem insensitive, but it also ensures that they are given the necessary all-day care that is so crucial andwhich a family would not be able to give due to time and other constraints. IravatiHarshe, as the older daughter who is married and has a girl of her own, is a revelation. I have seen her only acting in ads before and don’t really recollect any significant performance of hers in any other film. But the way she acts out the complex character who is torn between deciding the best for her father or her family, and choosing between her heart and her mind, makes it clear that the deep reserves of her talent were unexploited for long. Her casting may be inspired, but not that of MilindSoman. He suited well in his double role in Bhave-Sukhtankar’s last film Sanhita, but seems miscast here with his awkward Marathi diction. He plays Ira’s husband Dr. Pathak who is a pediatric. It is interesting to observe that Dr. Pathak more readily accepts and understands Ira’s father’s condition and adopts a lot more patient approach;being a doctor dealing with children, patience and acceptance comes more naturally to him.

The elephant that is used in the film also has its own solid reasons. One being Sanskrit scholar Dr. Shastri’s love for Kalidas’s play Meghdhoot which translates to an ‘elephant in the clouds’. Another being the vast reserves of memory that an elephant is supposed to have. A man with fast deteriorating memory wishing to ride an elephant gifted with huge reserves of it, lends the film a poetic touch apart from elevating it with more substance.There is also quite a lot of Vedic wisdom in the film, which thanks to the high quality subtitles (for a change!), I was able to follow.

Astu while dealing with all these themes doesn’t at all feel like a film with heavy doses of philosophy and that is the skill of the directors. The film is rather modest in nature. The empathetic gaze of the filmmakers falls on every frame of the film. They seem to have a lot of faith in humanism. The film is full of poignant moments that touch your heart. Having been a caregiver to my dementia stricken grandfather, i could personally relate a lot to the film and there were quite a few scenes when my eyes would become moist. Mohan Agashe, as expected of him, very skillfully portrays the slow downward spiral of a dementia patient. The relaxed and peaceful demeanor when his memory still hasn’t begun to cheat him; the shock and fear of not recollecting something very obvious when the disease is slowly and unknowingly creeping up on him; and a man totally gone into the hands of dementia – Dr. Agashe’s performance is quite touching and very convincing!

As I have seen my grand father suffering from Alzimer very closely, I can sincerely appreciate the hard work undertaken by the team of directors and the actors to recreate an Alzimerpatients image with the caregivers on a celluoid.

The film’s unassuming nature might make it difficult to notice the technical excellence, but shooting with an elephant on a very busy street is a mighty challenge in itself which the makers of the film have excelled. The framing of the indoor scenes or the outdoor shots with the elephant, all are well done. The background score lends the film a kind of beautiful tranquility.

Now, i do have a few minor issues with the film. It is a rather poignant moment, when, after being tended to like a child, Dr. Shastri calls Channamma‘aai’ or mother the first time. But when the same idea of Dr. Shastri calling out to Channamma as his mother is repeated towards the end, it came across as a bit emotionally manipulative to me. Also, there doesn’t seem to be much urgency in Ira’s actions the moment she realises that her very ill father has wandered away. It is only after a little while that she becomes tensed. A woman who is usually shown to be so sensitive, would have got worried sick from the moment it dawns upon her that her father has gone missing under her watch. But, like i have mentioned before, these are minor issues that don’t harm the film much.As a whole,Astu is a highly accomplished piece of work.

A poignant film, with a lot of depth and meaning, and exceptional performances from Mohan Agashe, IravatiHarshe and Amruta Subhash make Astu the best marathi film to release this year as yet, in my books. Bhave-Sukhtankar meet the high standards they have created for themselves. Must watch!