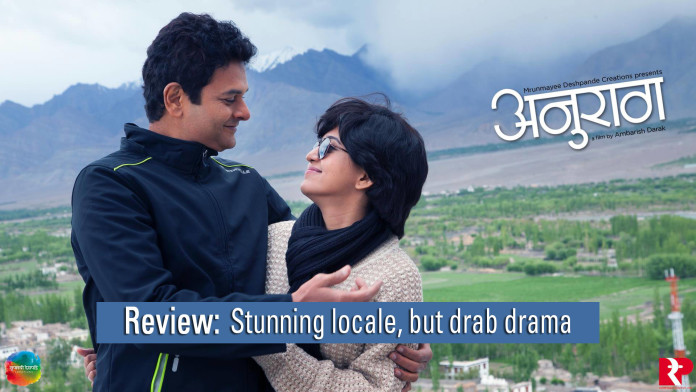 Mrunmayee Deshpande is certainly one of the better actresses in the Marathi film industry. She first caught my attention with her performance in the film Mokla Shwaas. In the recent past, too, her acting has been impressive. She left a mark in Katyar Kaljat Ghusli and even managed to hold her own in front of a stalwart like Nana Patekar in Natsamrat. She is credited for the screenplay of the film Anuraag and has also presented the film apart from playing the crucial role of one of the protagonist. After shining out in comparatively smaller roles in the above mentioned films, this is a film she has all to herself. But, quite disappointingly, though she plays her part well, the role and the film in general doesn’t really give her the scope – not even as much as the comparatively smaller parts did in previous films – to showcase her skills. 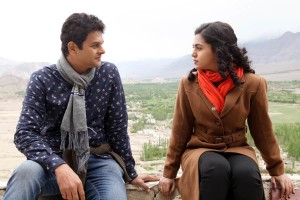 Anuraag is about a trip a married couple – Rishabh and Souwmya – take to the scenic Leh-Ladakh with the hope of rekindling their fast dwindling relationship. Leh-Ladakh is where their bond had first been welded and they have come here with the wish that the abundant natural beauty and lovely memories of their past from this place would inspire some love in them. Rishabh (Mahesh Gohil) is a businessman who is married for 10 years with his secretary Souwmya (Mrunmayee Deshpande). A workaholic, Rishab finds it difficult to give priority to Souwmya and their relationship. After a few years into their marriage and a failed pregnancy, their bond begins to weaken.

Both, Mrunmayee Deshpande and Mahesh Gohil manage to be fairly convincing in their respective roles. For a change, the songs and the background score of a Marathi film sound fresh. Though the choice of shooting the film extensively in a difficult terrain like Leh-Ladakh deserves appreciation, unfortunately for the film, the screenplay and the staging of scenes in general negates whatever little freshness the competent camerawork brings. The pretty frames add up very little to the film. From the plot it is quite clear that there is hardly anything novel in the subject. It is your usual bedroom drama that has been done to death on the Marathi stage. Only, here it has been transported to the mountains of Leh-Ladakh. The same old dialogues; the same old acting; the same old emotions. The film cannot lay off the influence of theatre in its staging, especially in the scenes that happen in the hotel room. As a result, the proceedings become drab and the leisurely pace doesn’t help either.

Finally, not much room is left for the audience to fill in the blanks, as everything is spelt out; this further disengages us from the drama unfolding on the screen. Sample the scene at the beginning in the airport: Souwmya is shown dragging their luggage all alone as Rishabh, the workaholic that he is, gets so busy with a phone call that even her presence slips out of his mind. Now, the symbolic allusions of this finely constructed scene to their relationship are fairly obvious. But somehow the need to further underline it is found necessary by actually spelling out what it meant in a dialogue. Such handling dampens any kind of spark in the film at the beginning itself.

The stunning locale of Leh-ladakh is not enough to alleviate the film from a clichéd screenplay and unimaginative direction.