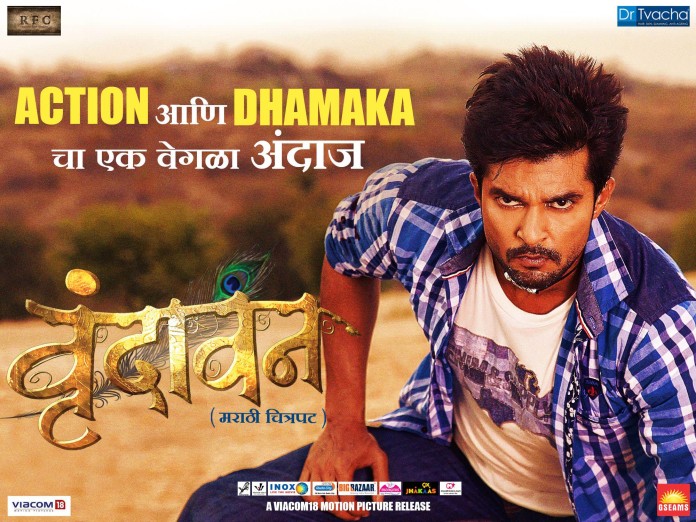 Raqesh Bapat made headlines by winning Mr. India few years back. After being a successful model, he made his debut on silver screen with Anubhav Sinha’s musical “Tum Bin”. Since then, he has been seen in many music videos, TV serials, reality shows and commercials. His boyish charm and cute smile has been winning many hearts for the past decade.

Vrundavan will be his first mega release in Marathi. Directed by TLV Prasad, this family drama is a complete masala film. Marathistars.com spoke with this multi-talented hero about his films, fitness and what keeps him motivated.
Here are the excerpts from this interview.

Raqesh, Vrundavan is a big budget film directed by legendary TLV Prasad. Were you nervous before signing this film?

While signing this film I was actually very excited. But as the release date is in the corner, I am getting nervous. Marathi audience prefers serious cinema. Vrundavan is a complete commercial film. We have made a beautiful film. I just hope that audience accepts it as an honest effort. Normally, I am very much critical about my work, but for the first time I am proud of this film. I request audience not to be judgmental or biased about this film. Just go and watch this good film with open mind.

Tell us more about this film. 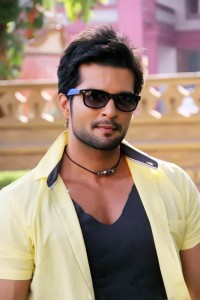 It is a complete family oriented paisa vasool film of commercial genre. It is a fun filled with comedy, action, drama, family values and has beautiful locations. Our DOP Suniel Khandpur is also co-producer of this film. He has done a brilliant work as every shot is very stunning. For action sequenced they have used various technologies like helicams and steadycams. I am sure everybody will love this film.

What is your role in this film?

This film is about a guy called Krish. He is yaaron ka yaar, a friend who will help lovers all the time. He hates injustice. He is modern and flamboyant. He comes from a very rich family but circumstances have led him to this village house with dysfunctional family. He loves his parents and girlfriend but situations turn so he has to leave his comfort zone and stay in a village.

This was such a great experience. I thought I am working with my Ajoba. He has such a good vibe and he is very caring. What I liked most about him was the way he thought about his craft. He just knows how to cut a scene as editing pattern in clear in his mind. There was a certain generation gap also among us. At certain times, he had issues with the way I would do a scene but I always discussed such things with him. I used to speak with him as my elder family member, and then he used to understand my point of view.

You have done many action scenes in this film.

First time in my life I have done so many action stunts. Generally there is a gap while shooting action scenes but we shot it continuously for 20 days. It was so crazy because in one go we had to finish entire film’s action sequence, that too in the heat of April. I had to be on the sets by 7 am every day. As most of stunts were done on harness I was always suspended in the mid-air kicking and punching. Physically it was very exhausting and I had bruises all over my body.

Did you go for any special training for these stunts?

Not exactly. Most of the stunts required stretching. I have always been doing rock climbing, river crossing since my childhood so it became very easy for me. Mostly I was on the harness and such rope tricks need good body balance. Luckily my adventure sports activities helped me here. I enjoyed these stunts immensely. It was like a circus for me. I used to look forward to do my action scenes eagerly like a child. 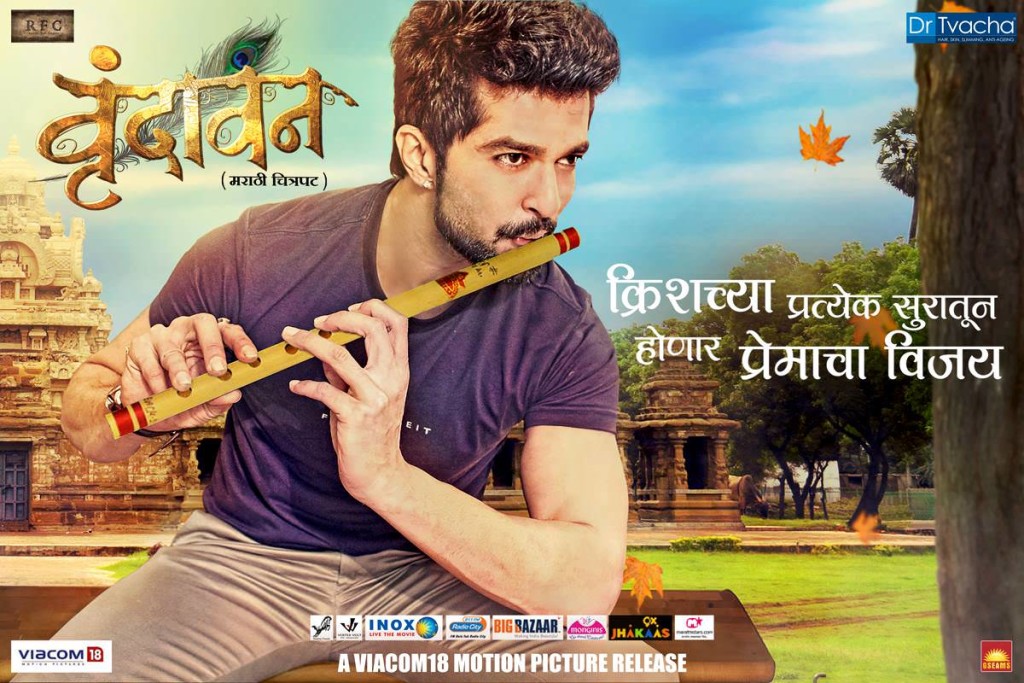 The film stars stalwarts like Ashok Saraf , Mahesh Manjrekar. How was the experience of working with them?

I was very nervous while shooting with Ashokji. When I met him for the first time on the sets it was a fan moment for me. I have loved all his performances. My entire family has been a fan of Ashokji. I had seen all his films while growing up. I had already worked with his wife- Niveditaji but somehow I never met him during that project. I always told Niveditaji that I want to work with Ashokji one day. When this project was offered to him, he was a bit apprehensive about it. For the first time he is playing role of a grandfather. Though he is playing a role of my grandfather, he looks very young in real life. I really admire his personality.

Maheshiji is an amazing director and actor. I have been his fan of his films since Vaastav. He is a master of his craft and it was pleasure to see him share screen space with him.

In this film I am also working with Bharat Ganshepure. What a talented guy he is! He just lifts any scene with his sheer energy. I learnt so much from him. Sharad Ponkshe is a gem of a person. He is a power-bank of acting. Uday Tikekar was more like a buddy on the sets. All these gi=uys are very friendly and none of them threw their typical starry attitude.

Apart from these senior actors, two beautiful girls are also working with you.

It was a fabulous experience working with Pooja Sawant and Vaidehi. I always tease both of them as Katrina and Priyanka of Marathi industry. Both these girls are glamorous and very talented. They light up when camera is on. They are good actors plus good human beings. Pooja is a fabulous dancer and she really has a great future if she chooses right kind of projects. I loved working with both of them.

What kind of difference you find in Hindi and Marathi industry?

I am very new to Marathi industry to comment about it but definitely there is difference of pace. Marathi industry is a little bit of slow pace than Hindi. May be because of the exposure level, but Marathi is yet to see what exactly commercial success is all about and that’s why they are restricted in their publicity and PR activities like Brand endorsements. Hindi has a universal appeal so, advertisers pump money without thinking of risks. For Marathi, this generally does not happen. If you see in the South, budgets are huge and returns are also huge. I always think that Marathi industry is a bit scared of exploring commercially. Marathi has good content, so people should go out and promote the film with a pure commercial angle. I think Vrundavan will be a trend setter in this way. We have been promoting this film very heavily as this is one of the biggest Marathi films releasing this year.

You started your career with modeling and then went to win Mr India. There are many Marathi girls in the modeling industry but very few Marathi boys. What may be the reason?

There is no reason as such. It is just a question of exposure. When I started my career it was not planned. I became Mr pune then Mr india and then Mr World just followed. It was God telling me what to do in my life. Also people say that I don’t have typical Marathi looks. That worked for me as an advantage as people look at me as a generic face. Many Marathi boys are also coming in the industry and becoming successful. The most popular model we had so far is Milind Soman. He is a hardcore Marathi. To reach this level one has to work hard. There is no substitute for it. Now I am seeing that heroes doing workout and trying to stay fit. This new trend of muscles has started. If you are working in this entertainment industry, you have to take care of your body. Just acting abilities does not make you look good on the screen. You have to get commercial value. See the example of SRK, he thinks and sells himself as a product. 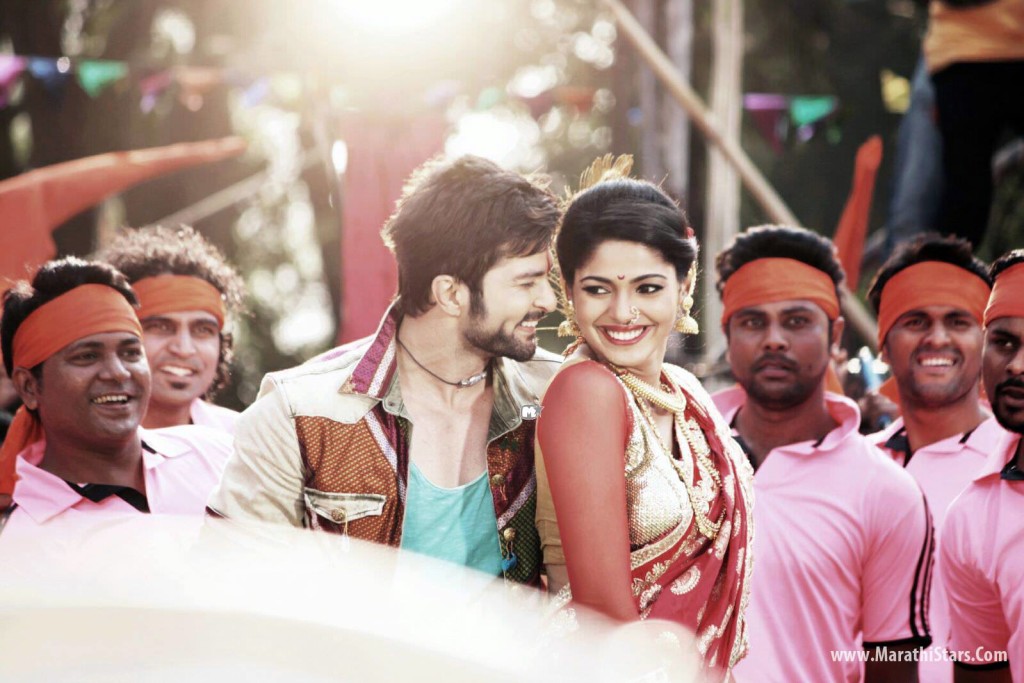 What is your Fitness Mantra?

I love to be fit. I can’t imagine myself getting fat or out of shape. It is a passion for me. I am more of a cardio person than heavyweights. I love cycling. I have cycled from Mumbai to Pune. I generally prefer to go on the cycle for shoots or other meetings as well. I love horse riding. I have a farm in the outskirts of Pune where I take my horse the hilly areas to look at the city from there. With every gallop of the house, I always feel so much negative energy is shading away from me. It is so blissful and content on the horse and I love experiencing that positive energy.

Rather than gym training, I do lots of functional training. I pick up things, do lot of ground workout. Everybody is into body building and muscle building. But most important is to make the foundation very strong i.e. core development. If you core strength is not good your body becomes more and more hollow.

I follow a simple but good diet. I eat every two hours. I don’t eat too much in one meal. When you are trying to reduce the weight always follow this trick. Eat whenever you are hungry. Do not wait till lunch or dinner time. However, watch what you are eating and always do portion control. Never full yourself. I am also careful about my sleeping pattern. Seven hours sleep at stretch is essential. As my schedule is not fixed one I cannot control my sleep pattern, still whenever possible I sleep for minimum seven hours at a stretch.

I am currently shooting for Sarva Mangal Savadhan with Manjiri Phadnis.

Tell us about your favorite Marathi food and books!

Hot Vadapav and bhel have always been my favorite food. I have Sane Guruji’s Shyamachi Aai. This book has been so inspirational for us that we have started an NGO “Shyamche Aai”. My sister Sheetal has been very instrumental for this project. The NGO helps children in Skill development.

Thanks a lot Raqesh for speaking with us about your new film. Marathistars.com wishes you and your team a grand success for your film Vrundavan.
Vrundavan releases in theatres across Maharashtra on 8th April 2016.