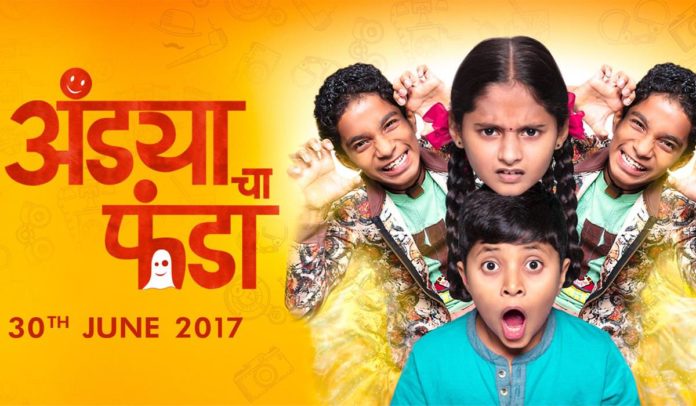 Films that star kids in lead roles are very sensitive in general. Pulling out natural performances from them is a skill. Very few directors are truly good at it. So the point is watching the kids in Andya Cha Funda perform is an exhausting experience. And we can’t even see anything wrong with the kids. It’s the makers who deserve the blame. But again this is one of the many errors this film has.

One peculiar thing that can be observed about many such interesting but half baked ideas. Many of these stories seems to have initiated from the climax. And the rest of the story is constructed based on it. While doing so, many set pieces too are added. Many of these makers tend to believe too much in their climax & it’s impact. They forget the fact that the audience would lose their interest in the film until reaching the climax. The same is the case with Andya Cha Funda. Somewhere in the late second half we find something interesting, but it’s too late.

As the trailer suggests the film’s lead are the two kids Andya (Atharva) & Fundya (Falgun).  Atharva belongs to a wealthy family which lives in a lavish beach house (supposedly in Madh). Fundya is a kid from the nearby slum. So it’s Andya & Fundya against the world. Fundya has some intuitions (of sorts) & he shouts in pain as his head seems to be in too much pain. (Nothing of it is explained, whether his parents ever felt a need to consult a doctor too is not mentioned, instead his father considers his ‘dreams’ as one of his mischiefs.)

Now the conflict of the film arrives when Fundya dies, hit by a truck, when he visits konkan with his parents. Just after that Fundya appears in front of Andya, but clueless & then suddenly he remembers everything. Now this is concerned with Andya’s mother Kumud (Deepa Parab). More description would be a spoiler.

So with that the film has suddenly turned into a mystery thriller. The further actions take place at a village in Konkan. But the film wastes just too much time when it shifts to Konkan. Mrunal Jadhav the popular child artists joins Andya & Fundya in their mission & makes the whole thing even more unbearable.

But then arrives an essential flashback sequence, which could have saved the film had it arrived at least 45 minutes earlier. Sandesh Kulkarni a truly talented actor shines in whatever chance he gets to save this sinking ship (the film). Some scenes here are technically good & bring in the thrill factor. But not good enough to improve the film overall.

The cinematography of this film is decent in it’s aesthetics but cluelessly keeps giving us top angle shots for no specific reason. The main issue with this film is not that it fails as a mystery, rather it fails by misusing it’s title characters. The chemistry between them has no heartfelt moments, or truly funny incidents. It fails here, to establish the lead characters & develop a connect with the audience.

Few years back we had one well made children adventure-mystery film “Chintoo 2”. The reason to it’s success was that it treated kids like kids! It had a compact, to the point plot & even with poor special effects the film essentially entertained.

If you’re planning to watch this film with or for your kids, think again they might get bored!