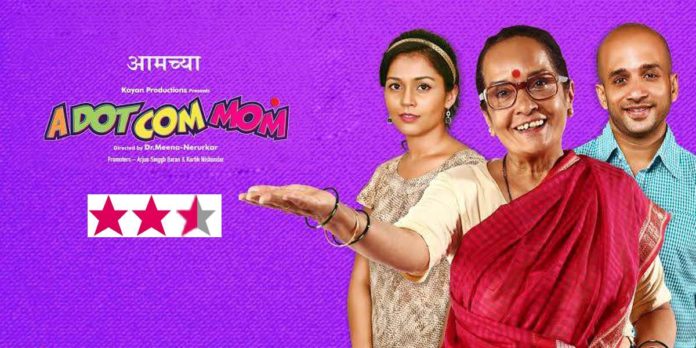 The makers of this film were bluntly stating that this film might appear like English Vinglish but is completely against its philosophy. In English Vinglish we saw a middle class (middle aged) Maharashtrian woman overcoming her complex of English language. English Vinglish was an extremely layered piece of work where the real moto was to put forth the idea that a language is nothing more than just a language & shouldn’t be used as a measure of an individual’s abilities.

However, A Dot Com Mom’s real moto is unclear to us. Sadly in a way what we interpreted is that one’s appearance is of utmost importance. Basically A Dot Com celebrates the age long concept glorified by many popular Bollywood films. Look western but deep inside, beneath stay Indian/traditional. The difference here is that instead of a love story we see the story of an old woman living in a village (supposedly in Konkan) who happens to visit her son in the US alone. Alone because the father (VikramGokhale) doesn’t want to (not that he hates his child, but he’s just not in the mood to travel I guess).

Thankfully we don’t have a clichéd “AisanFaramosh” son here. So there is no irritating melodrama throughout the first half. However we still have some poorly written & executed scenes which are supposed to be funny. The editing & background score is strictly amateur & so are the performances. Dr Meena Nerurkar who plays the lead is also the director of this film. The actor who plays her son is seemingly decent in some scenes but almost blank in most. Dr Meena herself is monotonous throughout the first half & appears to play a 6 year old girl at times.

Better performances could have definitely made noticeable impact to this film. There are a few seasoned actors in the cast too(though not in the lead). Vikram Gokhale has slightly longer presence than we expected & he does his bit to establish his character. Asha Shelar (Honar Sun…fame) & Dipti Lele (Lagori fame) play a mother-daughter duo living in the neighborhood (India). Among which Dipti Lele has an important part to play in the story (as she too is an NRI) & she is acceptable. Senior actor Vijay Chavan has been forcibly casted in a role for no real purpose.

The first half doesn’t appeal as the immaturity (as mentioned in all departments) is displayed every now & then. Anyways the second half manages to interest us. Dr Meena uses the method of contradiction to prove her point by showing the parents of her daughter in law as complete westernized vamps & devils. Whatever it be she still makes her point & keeps us interested (to some extent).

The film definitely has a few similarities with English Vinglish but they can be disregarded as they genuinely have a story to tell. The film has “n” number of logical plotholes too, but still it has a well-rounded story. Still the story needed much more exploration in the screenplay & other executing departments too. Though the moral or philosophical lessons they wish to preach never really reach us but A Dot Com Mom isn’t in the forgettable category which already has more than a dozen of films this year.

One aspect we felt was so unusual & yet appreciable (in a weird way!) in this film, there’s a romantic song when the couple shown in the film realize that soon they will turn parents. Did they meant that all couples fall in love again when they turn parents or is it that true love happens only when you turn parents. Or maybe we are reading too much into it!

A Dot Com Mom is acceptable because of one reason that it’s been made by people who are almost unrelated to the film industry & hence their approach is a little refreshing in midst of some poor films that have released this month.