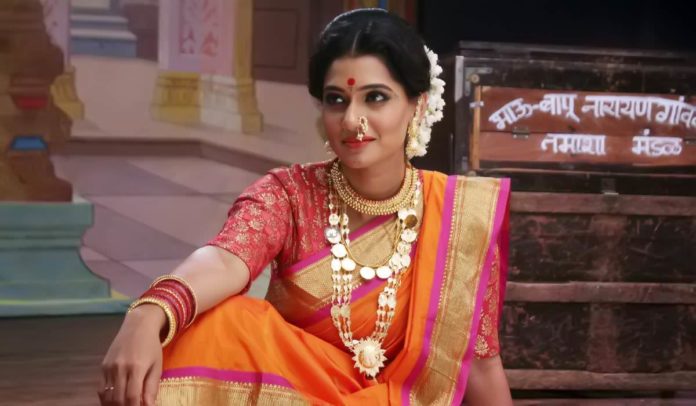 Tamasha Empress Vitha ruled over the hearts of tamasha afficianados of Maharashtra. Starting at the age of eleven she danced to the tune of the ghungroos well into her seventies, setting the stage, all over Maharashtra, on fire. She is responsible in getting government and public recognition for “Tamasha” the folk art of Maharashtra, thereby becoming the first female artist to win the president’s award for this art. In spite of earning immense popularity, prestige, honour and money, she had only disappointments during the last stages of her life. In the movie “Vittha”, actress Urmila Kanitkar-Kothare, plays the main role of Vitthabai Narayangaonkar. Upendra Limaye will be seen playing a very important role.

To bring the extraordinary life of the “Tamasha Empress” Vitthabai Narayangaonkar, to the general public, a movie “Vittha” based on her life, will soon hit the screens. The shooting for this film has finished and post production work is being carried out in full swing. The movie is directed by Pundalik Dhumal, the producers are Dinesh Agrawal, Mrs. Pritam Dinesh Agrarwal, Shubhadha Bhosale and Pundalik Dhumal himself.

The screenplay and dialogues of “Vittha” are written by Pundalik Dhumal and Shantanu Rode. Sanjay Jadhav and Devendra Golatkar are the cinematographers, the art director is Mahesh Salgaonkar. “Vittha” the unfolding of the life of the Tamasha Empress has an equally impressive music. Ajit Parab, Sameer Mhatre and Rohit Nagbhide are the music directors. Phulwa Khamkar is the choreographer, Anil Pemgirikar and Mahesh Barate are the make-up artists and Sanjeev Rajsingh is in charge of costumes. The editing is by Vijay Khochikar. In the coming New Year, it is certain that the movie goers will get to see a high quality movie “Vittha”.