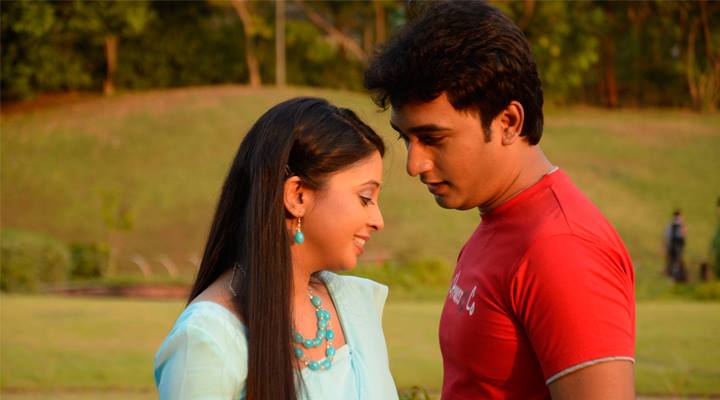 It is said that love just happens and one can’t plan about falling in love. It catches you unaware when you get attracted to somebody unexpectedly and keep thinking about that individual all the time, then you realize that you are fallen in love with that person. But the road towards is love is not always smooth and normally there are many twists in the love story. Sometimes one can not express the love and sometimes the entry of the third person in the love story leads to a triangle. Forthcoming Marathi film Asa Ha Atarangi which is produced by Paras Movies is a tale of a touching love story with a difference. Asa Ha Atarangi is slated to release on March 28th.

In Asa Ha Atarangi, the audience will get to experience the distinctive combination of love story and comedy. Under the banner of ‘Surya Putra’ The film is produced by Pyarelal Choudhary and directed by Ajit Shirole. Well known actor Makrand Anaspure is playing the central character named Jagannath in the film while Priyanka Yadav is the leading lady in the film. Mrs.Kiran Choudhary and Natin Kotwal are the co-producers of the film.

Presented by Paras Movies, The film is the story of an artist named Jagannath who likes to live life on his own terms. Jagannath who doesn’t care about money and in fact always go out of his way to make others happy. Incidentially he meets Meena who is very beautiful but blind. After meeting for couple of times they fell in love. Later a new friend named Prasad makes an entry into Jangannath aka Jagu’s life. Jagu who truly loves Meena takes a very brave decision for Meena’s treatment. It leads to a new turn in their lives. What is the brave decision all about? How Prasad’s entry changed the equations in Jagu’s life? Does Meenakshi realize Jagu’s deep love for her? Asa Ha Atarangi unfolds all these puzzles in an entertaining manner.

The story of the film is written by Hemant Edalabadkar. Lyricist Vijay Kuvalekar and Pyrelal Choudhary has written the songs and Deepak Choudhary has composed the songs. Cinematography is done by B.Laxman. Asa Ha Atarangi stars prominent actors from the Marathi film industry such as Makrand Anaspure,Priyanka Yadav,Vikas Patil,Pramod Pawar,Kishore Mahabole,Pratibha Bhagat et al.

Based on a tender love story Asa Ha Atarangi will be released in theatres on March 28th.