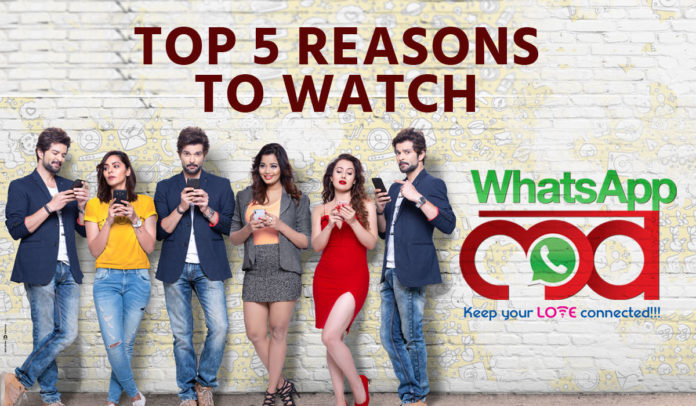 ‘Whatsapp Love‘ releases in theatres this friday & it promises to be a modern day romantic drama that is very relatable to the today’s audiences especially the youth! The film stars chocolate boy hero Raqesh Bapat, beautiful actress Anuja Sathe and the gorgeous Sareh Far who is an Irani actress and for the first time an Irani artist is to be seen in a Marathi film! We give you 5 reasons why this film is a must watch in theatres!

Model turned actor Raqesh Bapat has had a very successful career in Bollywood and ever since he entered the Marathi film industry he has been varied roles that challenge him. ‘Whatsapp Love’ too promises to be a similar project for him where he will be seen pushing his boundaries. Different from a usual lover boy character this character of his has more shades and some of them are grey shades too!

As the title of the film suggests ‘Whatsapp Love’ is a love (or lust) story set through the medium of Whatsapp! These days social media and Whatsapp has become such an inseparable part of our lives that our day to day interactions, fights even proposing our loved ones, all of that happens through it! But very few times we have seen this translated on the screen. And hence ‘Whatsapp Love’ becomes an important film as it reflects this side of our society!

In a normal love story there’s a boy and there’s a girl. They meet fall in love and then they try to get married but then they face many obstacles. Many of our love story films are designed such way, and hence there is no scope for the conflict of love vs lust! ‘Whatsapp Love’ promises to be a path breaking love story that deals with this conflict of love and lust and that too in very relatable and entertaining way!

‘Whatsapp Love’ has soulful and versatile songs that explore different layers of love as well as lust as the story of the film explores! Popular singers like Asha Bhosale, Javed Ali, Shreya Ghoshal have sung songs of the film and the lyrics are written by Ajita Kale while the music is composed by Nitin Shankar. ‘Shona Re‘, ‘Javal Ye Na’, ‘Raat Suhani‘ all these songs have already become popular among the audiences.

Many married couples who are immensely in love with each other may face difficulties as time passes by in their relationship. Even though the love is there, there’s also a bit of stillness and boredom in their relationship! Even without any specific reason such couples distant themselves from each other. ‘Whatsapp Love’ explores this situation smartly and it may give a solution to such couples through it’s message in the film!