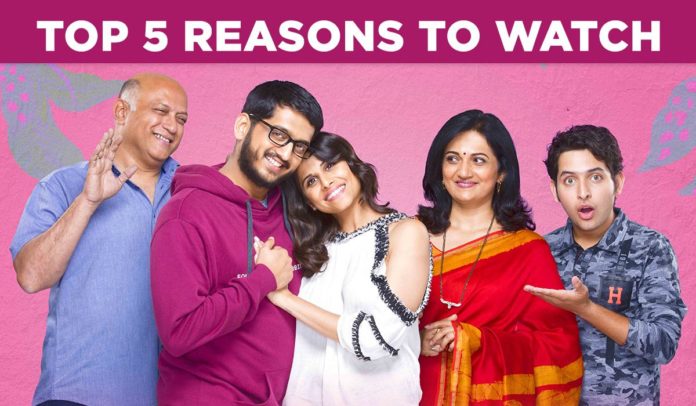 Written & directed by Upendra Siddhaye and starring an odd but exciting pair of Amey Wagh and Sai Tamhankar. Straight from the poster to the teaser, trailer & songs ‘Girlfriend‘ has caught the fancy of the audiences. The film promises to entertain today’s audience by making them feel that the story belongs to them and could happen with them! So we are putting out 5 reasons why the film is a must watch in theatres from this Friday, the 26th July.

Very few actors in Marathi have earned the kind of credibility in so less time as Amey has. We as audiences trust his choices as he has been very choosy about his work ever since he became a household name through the success of Dil Dosti Duniyadari. ‘Girlfriend’ to promises to be one such unique film for Amey Wagh!

After 2016 Sai has done only one Marathi film which was psychological thriller ‘Rakshas’. Now after some gap she is back in a light hearted entertainer where the audiences like to see her in! While in ‘Girlfriend’ her character seems to be kept a secret we are sure that Sai would impress us with her performance!

Upendra Sidhaye has been writing quality content in Hindi as well as Marathi cinema and for the new found limited series medium. Some of his popular and acclaimed works include ‘Drishyam’ (adapted), ‘Mumbai Meri Jaan’, ‘Killa’ (dialogues) & ‘Manjha’! Whenever a writer turns a director his films are more likely to be good in content and the same is expected from Upendra Sidhaye!

The teaser, trailer, and songs of ‘Girlfriend’ all of that reflect a very contemporary world. The sensibilities of today’s youth are not seen that often on the screen even in today’s content oriented films. This representation makes the audiences feel very close to the film and also the story of the film becomes very relatable!

‘Girlfriend’ promises to be a right blend of romance, comedy and drama. The film seems to be entertaining in all these aspects combined probably giving us a wholesome emotional experience! The films that are only funny all the time or only dramatic all the time end up loosing certain sections of the audiences. ‘Girlfriend’ instead is catering to a wider audience for sure!