Swapnil Joshi is all set to meet us in a totally new avatar in the upcoming film ‘Mogra Phulaalaa‘! The film is produced by Arjun Singgh Baran and Kartik Nishandar of Global Sports Entertainment and Media Solutions Private Limited (GSEAMS) & directed by Shrabani Deodhar! Shrabani Deodhar is one of Marathi cinema’s most respected female filmmakers who has made classics like ‘Lapandav’, ‘Sarkarnama’ & ‘Lekru’.

She is now back after long break from the industry. ‘Mogra Phulaalaa’ is her second film after the comeback. First she made a comedy ‘Sata Lota Pan Sagla Khota. “Shrabani Deodhar says I am very glad to stage a comeback to Direction after a long time with my film Mogra Phulaalaa It has a very uniquely blended love story of a different kind which revolves around a boy (played by Swapnil) who is so deeply involved in his family matters that he does not realize that he has crossed the age of marriage, until one day when he falls in love with a very strong and independent woman and realizes that his love for her though she belongs to an entirely different world”. 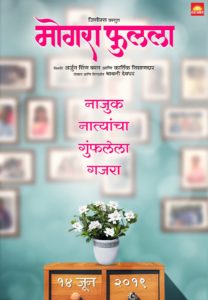 The film is produced by Arjun Singgh Baran & Kartik Nishandar of GSEAMS, which had earlier produced Fugay, Tula Kalnaar Nahi, Ranangan and presenter of Bhikari. They said, “Swwapnil Joshi has been an integral part in the growth story of GSEAMS and we are very happy to be producing one more film with him in the lead. We have always endeavored to make films that are different in terms of stories and characters and tried to making exciting cinema. We are very confident that Mogra Phulaalaa like our other movies will be well appreciated by all.”