Swwapnil Joshi, reigning Marathi superstar will be captain of this mad ship with a stellar ensemble cast of comedy stars. A multi-faceted actor, Swapnil belongs to a league of actors who has achieved great success across films and television. On television too he has acted in and anchored several popular reality and fiction shows. Swapnil is one of the few actors on Indian television who is always ready to experiment with characters and genres and is blessed with great comic sense.

In Marathi, the word ‘Dhabal’ indicates a place for youngsters’ hangout. The one-hour episode will be woven around everyday situations but in a humorous manner giving the viewers an hour of rib tickling fun and enjoyment. Swapnil will be accompanied by Sidharth Chandekar and each episode will see some more known faces adding to the fun in their inimitable styles.

Mr. Jayesh Patil, Programming Head, Star Pravah speaking about the show said, “We are now looking to experiment with content in our prime slots. ‘Dhabal- Ek Taas Time Paas’ is Star Pravah’s new approach to comedy and its uniqueness will definitely appeal to the audience. This show has a fresh concept and we are looking at bringing it as a seasonal show. We first experimented with a chat show and now we are merging fiction and non-fiction to create a new format. Swwapnil’s presence will add to the charm of the show. We are sure that the viewers will look forward to the show every week”

Swwapnil Joshi speaking about the show said, “As an actor, I have always tried to add a new dimension to everything that I do. Dhabal is a very unique concept and probably the first time on Marathi television that we will see fiction and non-fiction merging in a single show. I am extremely excited to be a part of Dhabal where I will be the host, the actor and the narrator. Other characters are also interesting and add a nice flavour to the show. This is challenging and I am truly looking forward to it.”

The show is scripted, produced and directed by Mr. Srirang Godbole from Indian Magic Eye production. 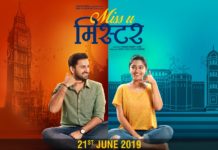