Siddharth Chandekar and Mrunmayee Deshpande will be seen sharing the screen together in Miss U Mister, a Marathi movie releasing on June 21. Sameer Joshi, who has many hit films and popular TV serials to his credit, is directing the film which is produced by Deepa Tracy and Suresh Mhatre and co-produced by Mr. Kewal Handa, Mr. Sandeep Bhargava and Mr. Manish Handa. The movie is presented by Mantra Vision in association with Third Eye Kreative Films.

The first poster of “Miss you Mister” was released recently. Miss U Mister, is a family entertainment revolving around relationships with a spice of surprises and twists added to the story and characters in the movie are played by leading actors such as Rajan Bhise, Savita Prabhune, Avinash Narkar, Radhika Vidyasagar are other stars in Marathi films, plays and TV serials. 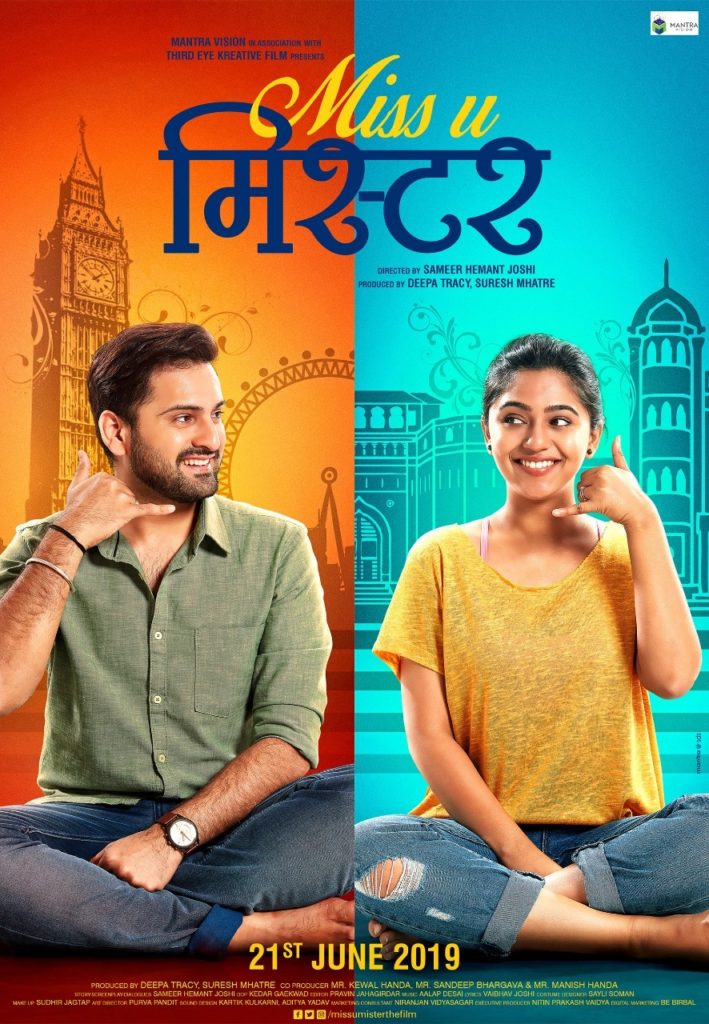 Mrunmayee Deshpande, said, “Miss U Mister is my second film with Sameer Joshi, writer-director of the film; the first one being Mamachya Gavala Javuya. I am playing the lead role of Kaaveri in the film representing today’s young generation. It is fun working with Siddharth. The story is about how the couple copes up with the challenges and complications that temporary separation brings into their lives.

Siddharth Chandrakar, while speaking about Miss U Mister, said, “Mrunmayee and I have acted together in one act plays (& serial Agnihotra) during our college days. I enjoyed working with her, a very talented actress indeed! I am playing the lead role of Varun in his film. What’s impressive about our director Sameer Joshi is that he gives full freedom to his actors.

Sameer Joshi has written and directed the film. Joshi has many hit films including Bus Stop (2017), Mamachya Gawala Jaau Ya (2014), Mangalashtak Once More (2013). He has also directed TV serials Be Dune Daha, Preeti Pari Tujhwari and Yek Number on Star Pravaah.