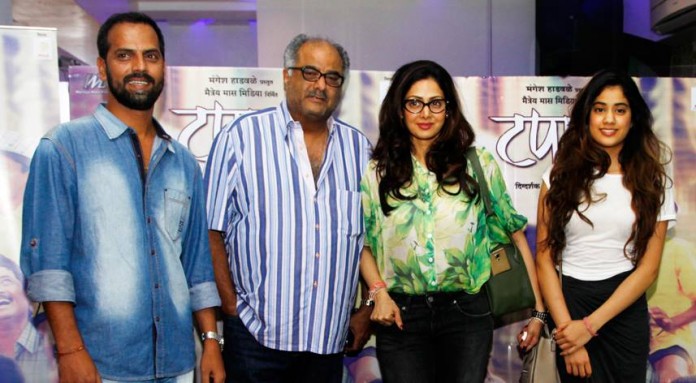 The special screening of the Marathi film Tapaal has seen many Bollywood celebrities, who wished best luck to the film. Akshay Kumar, Arjun Kapoor, Bony Kapoor, Sridevi, Imtiaz Ali, R Balki, Gauri Shinde, Ravi Jadhav attended this screening. Sridevi later expressed on Twitter, a social networking site as, “Just watched Marathi film “Tapaal“. After a long time, was teary eyed & emotionally choked. Must watch film for all. Laxman who was DoP of English Vinglish has done a commendable job in his first film as director & has packed some memorable moments in Tapaal” Akshay Kumar also praised the film and urged people to watch this film on 26 September.

Letter writing was once considered as a skilful art, receiving a letter was always associated with feelings and emotions. “Tapaal” a Marathi movie directed by Laxman Utekar has managed to create this nostalgia on silver screen. The film has already won many prestigious awards before release. What more, it has already started getting praises from Bollywood.

Another screening for the film was presented for the postmen. Every single postman was moved by the film.