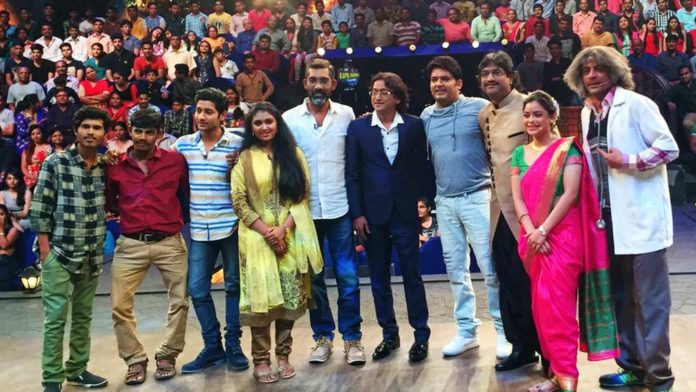 After creating box office history for Marathi film Industry, Sairat has become one of the most talked films in India. The Hindi film industry has already been in awe with this epic love-story which blends commercial aspects as well as meaningful cinema in a perfect synergy.

The Team Sairat is already on cloud nine and to add one more feather in their cap the team will be a part of “Kapil Sharma Show” on Sony TV. The episode will be broadcast on 12 June at 9 pm.

The Kapil Sharma Show is a comedy show where many Hindu film stars appear to promote their films. However, for the first time a Marathi film team will be part of this popular show. Director Nagraj Manjule, lead actors Akash Thosar, Rinku Rajguru and music composers Ajay Atul will be present during this show. Arbaz Shaikh (Salya) and Tanaji Galgunde (Langdya/Pradeep) will also be a part of this show. The team will be seen dancing on the song “Zingat”. The fictional family and friends of Kapil Sharma will interact with this team and also perform some skits based on the film.