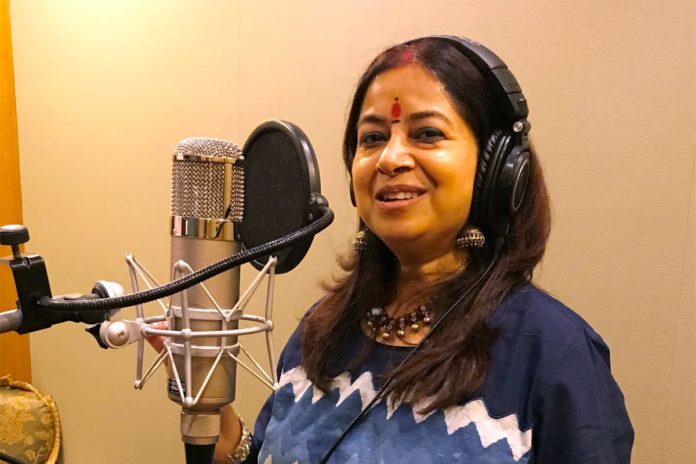 Many Hindi musicians & singers are turning towards Marathi these days. And the newest welcome addition to this list is ‘Ishqiya’ fame singer Rekha Bharadwaj. The film that she has sung for is the international acclaimed horror Marathi film ‘Lapachhapi’. Rekha Bharadwaj has sung a ‘angai geet’ called ‘Ek Khel Lapachhapicha..’. Recently the song was recorded at Bharadwaj Studios.

‘Lapachhapi’ is produced by Jitendra Patil under his ‘Midas Touch Movies’ banner & Aruna Bhatt, Suryaveer Singh Bhullar under their ‘Wild Elephant Motion Pictures Pvt. Ltd.’ banner. The film is directed by Vishal Phuria. Though this song from ‘Lapachhapi’ was originally sing by Nandini Borkar, Rekha Bharadwaj’s unique voice will add a unique dimension to the song.

This ‘Angai’ is written by Swayeshri Shasin & is composed by the trio of Ranjit Patnaik, Tony Basumatri & Utkarsh Dhotekar. The horror element has also added to the composition of this song. The film stars Pooja Sawant, Usha Naik, Vikram Gaikwad, Anil Gawas & is set to release on 14th July.