Swapnil Joshi’s upcoming film ‘Mogra Phulaalaa’ marks a reunion for Swapnil Joshi & senior actress Neena Kulkarni! Neena Kulkarni is playing Swapnil’s mother in this film. And an exclusive poster of the two actors was recently reveled on social media. In the poster we can see Swapnil peacefully sleeping on the lap of his mother played by Neena Kulkarni!

The two of them worked together for the last time long back in 2004-05. It was for Zee Marathi’s (back then Alpha Tv Marathi) ‘Adhuri Ek Kahani’! After around 14 years they are now working together in ‘Mogra Phulala’ & as mother & son. The audiences would surely be interested to watch their chemistry unfold in theatres. 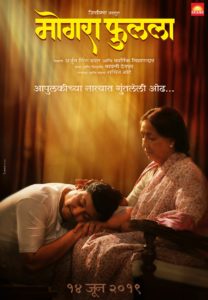 The film also stars Chandrakant Kulkarni in an important role who is returning to acting after some time after directing many great films. Produced by Arjun Singgh Baran & Kartik Nishandar of GSEAMS (Global Sports Entertainment And Media Solutions Private Limited) who produced Fugay, Tula Kalnaar Nahi, Ranangan and presented Bhikari, ‘Mogra Phulala’ will be releasing in theatres on 14th of June!

There has been a lot excitement for this film as Swapnil Joshi seems to be in a completely new avatar from his appearance to the way he has been shown riding a scooty! All of that makes him appear like a common man. ‘Mogra Phulala’ is a film that is about relationships & how they define one’s life & love life.