In last few years, Marathi cinema has transformed itself intoa perfect blend of meaningful subject and a commercially viable venture.  Filmmakers are making a point of making films which will entertain a wide range of audience and at the same time address an important issue. Themuch awaited Marathi film – “AJOBA”directed by Sujay Dahake is slated for a release on 9th May 2014.The film is produced by Lalasaheb Shinde and Rajendra Shinde under the banner of Supreme Motion Pictures Pvt Ltd.

It is based on a leopard’s journey from Malshej Ghat to Boriwali National Park, Mumbai. Dr. Vidya Athreya, a wildlife biologist collared a leopard which was rescued in Junnar, in 2009. The story is based on the true events that took place after the animal was released in the Ghats. With the chip fitted in his collar, his movements could be tracked through the GPS system.

The film talks about the ever increasing human-animal conflict. It throws light on the various issues related to conservation of wildlife.

The noted Bollywood actor Urmila Matondkar plays a lead role in the film. She plays the central character of the wild life biologist. She marks her debut in Marathi cinema through this film.The screenplay of the film is written by Gauri Bapat and the music is composed by Saket Kanetkar. The sound designing is done by Nimish Chheda and Avinash Sonawane.

Along with the footage of the actual leopards the audience will also get to see the animal through visual effects. The visual effects company – Illusion Ethreal has done a splendid job of creating the special effects for the film.

Well-knowncinematographer Diego Romero captures the Leopard’s thrilling journey and the landscape beautifully through his camera.

The journey of Maharashtra’s first collared leopard will be an experience in itself. 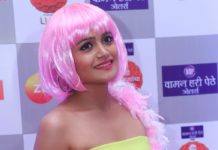