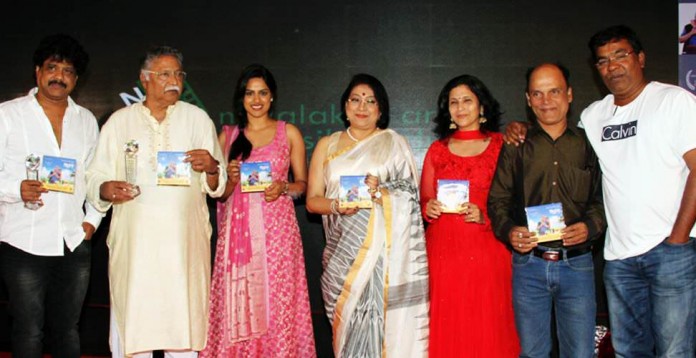 Today Marathi industry is going through a golden phase and a lot of good content driven subjects are being made like ‘Fandry‘ ‘Shala’, and ‘Anumati‘ which were brought to you by the house of Navlakha Arts and Media Entertainment headed by Nilesh Navlakha and Holy Basil Productions Pvt Ltd headed by Vivek Kajaria is adding one more good subject driven film to its oeuvre but this time Virtue Entertainment headed by Amit Ahirrao is co-producing ‘Siddhant’ which is a slice of life film about how to lead a principled life and the mathematical representation of life and how we lead lives by subjecting ourselves to it.

The grand music launch function of ‘Siddhant’ was recently held amidst the august gathering of actors Vikram Gokhale, Swati Chitnis, Kishor Kadam, Ganesh Yadav, Sarang Sathaye, Neha Mahajan, Madhavi Soman, Chandrashekhar Kulkarni, Prashant Tapasvi, Suraj Satav, Baba Afle, and Kanchan Jadhav. The evening was regaled by the singing of Shankar Mahadevan and Makarand Deshpande with lyrics like ‘Thodese Guntlele’ ani Ghatt Kahi Sutle’ written by Soumitra aka Kishore Kadam and composed by Shailendra Barve and both the singers confessed that the songs were the soul of the film. And the film is making waves on foreign shores like the selection for Toronto International Film Festival of South America (IFFSA) and the New York Film Festival .

The film revolves around a grandson Vakratund Deodhar played Archit Devdhar and his grandfather Appa Thosar played by Vikram Gokhale and the thin thread of relationship between them and their performances are the crowning glory of the film. The director Vivek Wagh thanked the cast and the producers for showing confidence and implicit trust in a debutante director like him . Vivek who till now has been the Executive Producer in many successful films like Ringa Ringaa, Checkmate, Ajinkya, Shala, Fandry , expressed that direction has given him a different sensibility from producing which has really touched him. Producer Kajaria said that film is a medium of social change and the mirror of society and it is their endevour to present a film which gives out a message to society and Siddhanth has done precisely that and the entire team is responsible for taking this film to a glorious high.

This sensitive tale releases May 29 all over Maharashtra.