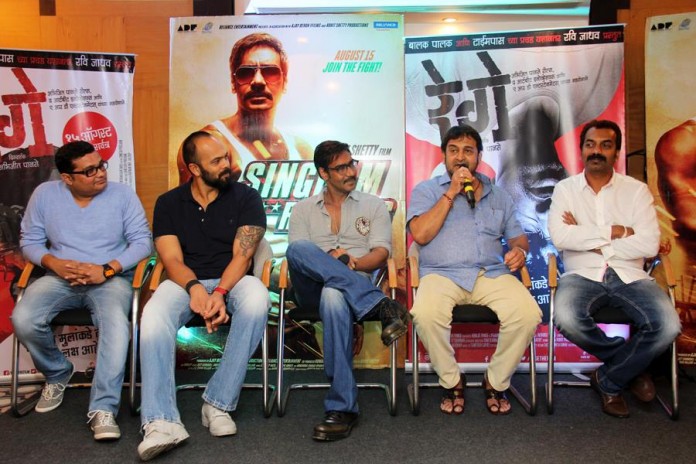 ‘Rege’ and ‘Singham Returns’ come together for an event that’s a first in the glorious 100 year old history of Indian cinema. The producers of both the films which release on the same day – August 15th, addressed a joint press conference in a one if its kind gesture. Hindi films are often blamed for leaving a very small number of theatre screens for Marathi films. The producers of both these films have made it clear that this time they have divided the theatres amongst themselves in such a manner that both films will get screens in theatres that are most important for their respective film’s business.

The producer–director of ‘Rege’ – Abhijeet Panse, presenter Ravi Jadhav and Ashwini Darekar, Mahesh Majrekar who essays a major role in the film along with the producer-actor of ‘Singham Returns’ – Ajay Devgan and producer-director Rohit Shetty were present at the event.

‘Rege’ and ‘Singham Returns’ that release on the same day; is considered to be a very positive development. Hindi and Marathi films share a healthy competition. While piracy remains the biggest enemy of the business, it’s best that instead of fighting each other these two industries have put up a united stand. The producer–director of ‘Rege’ – Abhijeet Panse, presenter Ravi Jadhav and Ashwini Darekar and the producer-actor of ‘Singham Returns’ – Ajay devgn and producer-director Rohit Shetty addressed the media jointly while affirming, “That’s the primary reason why we decided to mutually distribute the most important theatres within our two films.” The teams of both films also wished each other good luck and a smashing success.