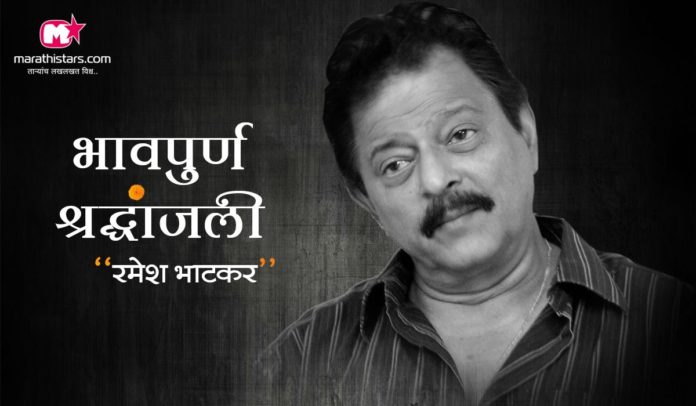 Whether it’s films, serials or plays Ramesh Bhatkar had played iconic unforgettable characters in every medium. After Dr. Kashinath Ghanekar it was Ramesh Bhatkar who essayed the role of ‘Lalya’ in the popular play ‘Ashrunchi Jhali Phule’ & his work was appreciated & loved.

As a film actor Ramesh Bhatkar was part of many iconic films like ‘Ashtavinayak’ & ‘Maherchi Saadi’! He was very recently seen in the Hindi film ‘The Accidental Prime Minister’ playing the role of then Maharashtra CM Prithviraj Chauhan. In serials he was seen in Zee Marathi’s hit serials like ‘Tu Tithe Mi’ & ‘Majhe Pati Saubhagyavati’!

He was suffering from Cancer & was admitted in ‘Elizabeth Hospital’ in Mumbai. He was battling cancer from some time & unfortunately lost to it. However till the very end he was known as a full of energy actor who entertained the audiences for several decades. May his soul rest in peace.