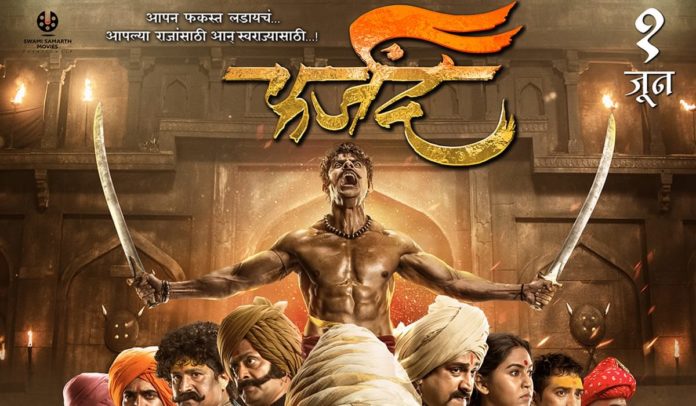 ‘Farzand’ is currently the most awaited Marathi film that is all set to actualize our dream of a big budget action film based in the times of the Great Chhatrapati Shivaji Maharaj. The first poster of the film was recently revealed it gives us the exact idea of a grand historical action film! Presented by ‘Swami Samarth Movies Creations LLP’ ‘Farzand’ releases on the 1st of June.

This film is based on the battle of Panhala fort during the times of ‘Shivshahi’. Kondaji Farzand along with few brave Mavalas won the fort for Chhatrapati Shivaji Maharaj & Swarajya. This tale of bravery is presented in a grand cinematic style in this film. This film is produced by Anirban Sarkar & is co-produced by Sandeep Jadhav, Mahesh Jaurkar & Swapnil Potdar. Digpal Lanjekar is the writer-director of the film.

This poster has definitely excited the audiences in general & the Shivbhakts specifically! Actor Chinmay Mandlekar is seen playing Chhatrapati Shivaji Maharaj in this film, whereas we will also see Prasad Oak & Mrunmayee Deshpande in important roles in ‘Farzand’. The title role of ‘Farzand’ is played by a new actor who is already getting good appreciation from the audiences.