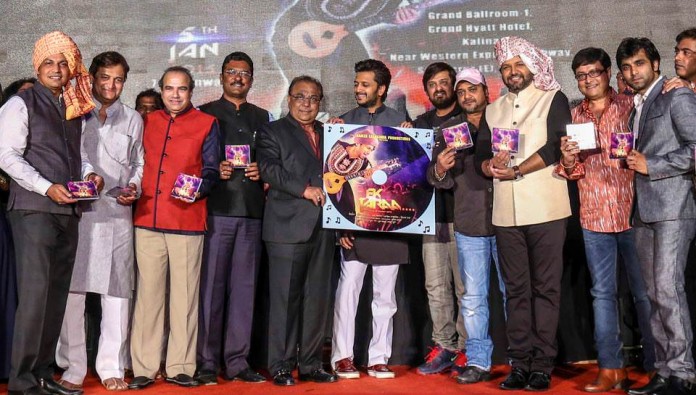 The saga of the life and lives of these grand stars has been portrayed through the film ‘Ek Tara’ through the viewpoint of renowned singer-musician-director Avadhoot Gupte. Recently, music for this film was launched in a star-studded event. The presence of several famous artistes from the Marathi and Hindi film industry proved to be a glittering attraction of this event like Shivsena MLA Pratap Sarnaik, Aslam Lashkaria, Actor Ritesh Deshmukh, renowned music directors of Bollywood Sajid-Wajid, veteran producer-director-actor Sachin Pilgaonkar, Mahesh Manjrekar, Makrand Deshpande, distinguished singer Suresh Wadkar along with the entire star cast of the film and several other renowned personalities.

This film is produced by Rais Lashkaria and is scheduled to release on 30th January. Rais Lashkaria Productions made a confident entry in the Marathi film industry through a quality film like ‘Swarajya….Marathi Paul Padate Pudhe’. It need not be mentioned that Avadhoot Gupte’s film is essentially a lavish feast of music given the fact that ‘Ek Tara’ too is a music-centric film. A whopping number of 13 songs will facilitate both the thirsty viewers and eager ear-worshippers through this upcoming film ‘Ek Tara’. Renowned lyricist Guru Thakur has penned the lyrics. Several captivating songs such as ‘Jindagi He Zaad’, ‘Thok Salaa’, ‘Visar Tu’ (Rock) or ‘Har Kaash Mein’ composed by lyricist Guru Thakur and two songs to worship the almighty viz. ‘Yed Lagala’ and ‘Devaa Tuzyaa Navacha Yed Lagala’ have proved to be excellent compositions. Beside, the modern presentation of Bharud songs viz. ‘Waali Tu Lekarancha’, “Jay Jay Ram Krishna Hari’, ‘Chalate Nane’ and ‘Ardhyaa Halkundane’ too need to be mentioned explicitly. Suresh Wadkar, Swapnil Bandodkar, Dnyaneshwar Meshram, Vidit Patankar, Mugdha Karhade and Avadhoot Gupte have been sung these songs. Moreover, director Abhijit Panse and Sound Recordist Avadhoot Wadkar too have tried the strength of their voices.

The main star cast of the film ‘Ek Taraa’ includes Santosh Juvekarr, Tejaswini Pandit, Urmila Nimbalkar, Sagar Karande, Sunil Tawade, Mangesh Desai and Chaitanya Chandratre. The story of this film has been written by Avadhoot Gupte and Sachin Darekar whereas the screenplay and dialogues have been penned by Sachin Darekar. Produced by Sadik Lashkaria and Co-Produced by Vishal Ghag. Cinematography by Amalendu Chaudhari and Shailesh Mahadik is the art director of this film. Editing by Imran Mahadik and Faizal Mahadik. Ashwini Kocharekar has been the costume designer of this ambitious film ‘Ek Taraa’ releasing on 30th January.