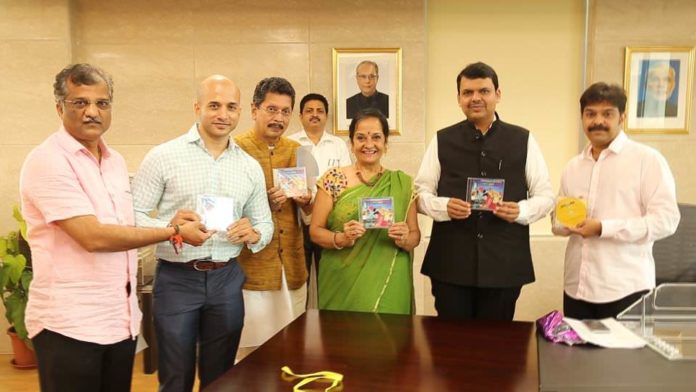 Chief Minister Devendra Fadnavis launched the audio songs of the film A Dot Com Mom recently. On the occasion, he said that this is the first Marathi movie to be shot in America and that it is a matter of pride for all the Indians.. Along with the Chief Minister, Minister of State for Home, Finance and Planning Deepak Kesarkar also graced the occasion. Also present for the launch was Sai Gundewar who plays the role of a simple and sweet son to the simple and innocent Dot Com Mom.

Dr. Mina Nerurkar who has given the Marathi audience popular plays like ‘Sundara Manamadhe Bharli’ and ‘Avgha Rang Ekachi Jhala’ is debuting as a Director for the movie A Dot Com Mom. Along with the theatre industry, Dr Meena Nerurkar is also renowned in the literature field. For years she has been writing for the Sunday issue of Saamna newspaper as well as for the Lokprabha magazine and she has written books like Dhanya ti Gynaec kala‘’ and ‘Thase Mansanche’.

The movie is produced under the Kayan Productions banner and along with the Direction of the movie; Dr. Mina Nerurkar has also taken the responsibility of, Dialogue writing, Lyrics and Choreography. She herself will be seen playing the role of A Dot Com Mom. Arjun Singh Baran and Kartik Nishandar of GSEASM are the presenters of the movie. The film is slated to release on 30th September all over Maharashtra.