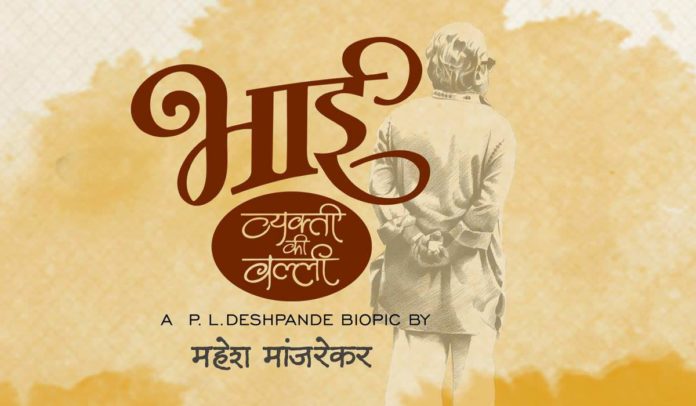 Bhai – Vyakti Kee Valli, the Pu La Deshpande biopic directed by Mahesh Manjrekar has created a new record even before hitting the theatres! While we have had sequels in Marathi cinema, but it’s the first time in Marathi cinema that a film will be releasing in two parts in the same time period. The first part of ‘Bhai – Vyakti Kee Valli’ – Purvardh will be releasing on 4th January 2019 & the next part will release after a month on 8th February!

Popular film critic turned screenwriter Ganesh Matkari who has written the screenplay of ‘Bhaai..’ revealed that it wasn’t decided from the beginning that the film will release in two parts but they had the idea that the length of the film would be longer. Later the decision of releasing the film in two parts was taken by the team of the film that also includes the production house ‘Viacom 18 Motion Pictures’ who are presenting the film.

Interestingly the last Indian film that was released in two parts ‘Gangs of Wasseypur’ was also presented by ‘Viacom 18 Motion Pictures’! The makers took this decision as they didn’t want to omit any chapter from Pu La’s life! Pu La fans too will be treated with two films on Pu La that too back to back within the period of one month!

Along with that ‘Bhaai..’ is also the first Indian ‘biopic’ film to be released in two parts! With this decision one thing can be said about Marathi cinema that it believes in it’s content so much that it can break general norms associated with the genre of that film! Sagar Deshmukh will be seen playing Pu La in the film & there are many other actors in important roles in the film.