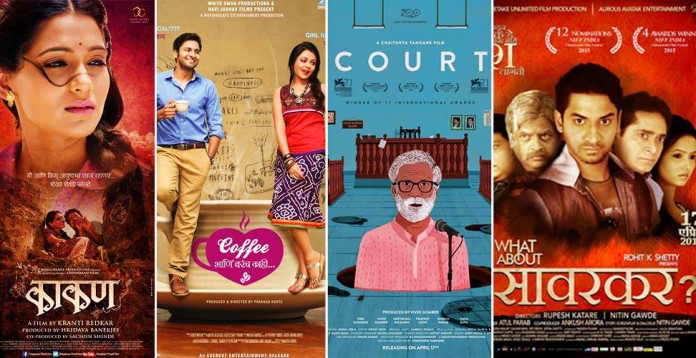 The month of April will be very busy for Marathi box office as four to six films will be releasing in this month. Right from a very serious drama to funny comedies to romantic sagas, something will be there for every member of audience.

Jitendra Joshi has recently been known for his negative roles will return to silver screen as a romantic hero. Urmila Kanetkar and Jitu will be seen in Kakan as the pair from 1970s era. The film is debut film for actress Kranti Redkar as a director. The film releases on 10 April.

Another film by a debut director which has created lots of buzz even before its release is Coffee aani barach kahi. This is a simple love story narrated in an unusual way. The fresh look of the film, amazing starcast and soulful music has made this film an absolute watch for cinegoers. The film releases on 3 April and stars Prarthana Behere, Vaibhav Tattvavadi, Suyash Tilak, Neha Mahajan, Bhooshan Pradhan.

Court, one of the most powerful and realistic film also releasing on 17 April in India. Chaitanya Tamhane directed this film has won National award & more than 17 awards in various international film festivals. The film has been praised by critics and hopes to generate enough attention at the box office as well.

“What About Savarkar” is also ready for release on 17th April. This film is about ideologies of Swaantryaveer Savarkar and his ardent follower. The film revolves around how a single youth can create a revolution with the Savarkar’s philosophy. The film is jointly directed by Rupesh Katare and Nitin Gawde..