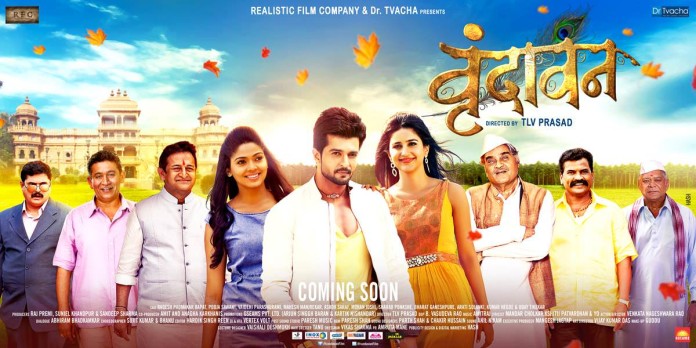 Most Awaited Poster Launch of Marathi Film “Vrundavan” Full of entertainment film ‘Vrundavan’ is the top hottest topic now a days because of its Grand Location like Aayush Resort and use of imported cars in this film.

We have another news related to this film is its poster has been launched today. The calligraphy of the name Vrundavan is done so beautifully that it makes you forget all things. No doubt that this film will hit the theater and box office as it has perfect mixture of great star caste, great location, and full of spice, action and entertainment.

The other strong side of this film is it has great actors like Mahesh Manjrekar, Ashok Saraf, Mohan Joshi, Sharad Ponkshe, Uday Tikekar, and Bharat Ganeshpure. Marathi Audience will get nice treat to see acting of all such great actors together. Hindi serial actor Rakesh Bapat is in lead role and Pooja Sawant as well as Vaidehi Parsurami are also in lead role.

This film is directed by TLV Prasad who has worked in many regional languages so no doubt that this film will be a complete entertainment package for audience. Raj Premi, Sandeep Sharma, Sunil Khandpur this trio has produced this film under the banner named “Realistic film Company” and Amit Karkhanis and Anagha Karkhanis are co-producers. Kartik Nishandar and Arjun Karhan who are directors at GSEAMS promoting this film. Amitraj has given music to this film and the choreographer is great Ganesh Aacharya. This full of entertainment film will be releasing in month of February 2016.