Ankush Chaudhari is one of the most good looking men in Marathi film industry and has starred in colossal hits like ‘Duniyadaari’, ‘Double Seat’ etc and now he will be starring in the realistic crime drama ‘Dagdi Chawl’ made famous by the gangster politician Arun Gawli aka Daddy . We caught up with Ankush at the trailer launch of the film. Here is what he told us.

There are a lot of expectations from you after the big success of ‘Double Seat’.

Yes. I am aware of this and I am sure ‘Dagdi Chawl’ will fulfill all the expectations of my fans as I have played a completely different action role from ‘Double Seat’ which was more of a middle class drama and I am confident that my action role will be lapped up by the masses.

How did you prepare for your role in ‘Dagdi Chawl’? 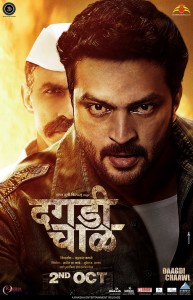 I have seen the scenario with my own eyes as I grew up in the mill areas of Lalbaug which was the stronghold of Gawli and I have seen the turf wars, the murders and the violent attacks on each other by gang memners closely and I knew instantly how to portray my character.

It was great and we all put in our best especially the director Chandrakant Kanse who has assisted many big directors and knows his craft well and has done a good job on the film. Also Makarand Deshpande who plays Daddy has also done an excellent job.

Yes. Our DOP especially has done a great job and the rest of the technical team also has done a technically superb job.

There is very less scope for music or romance in the film.

How will you be promoting the film?

This is just the first event and we will be holding many more events to publicize the film. Our producers are really good and they have provided a good support in the making and promotions of the film