Court – a multilingual drama directed by Chaitanya Tamhane has been selected as India’s official entry for the Oscars. The film was chosen unanimously by a 16-member jury headed by Amol Palekar. The film be sent for the category: Best Foreign Language film. This is Chaitanya Tamhane’s debut film as a director. 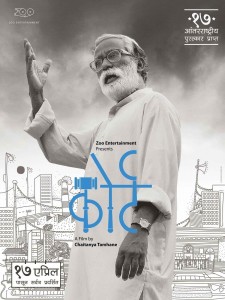 Court has already been a toast of international film festivals in more than 25 countries and has won National awards for the best film in 2015. The film is about an ageing folk singer and his trial in court on charges of abetment of suicide. He is accused of performing an inflammatory song which might have incited the worker to commit the act. As the trial unfolds, the personal lives of the lawyers and the judge involved in the case are observed outside the court. This powerful narrative deals with most debated and sensational topics in a fierce way.

The film has been produced by Zoo Entertainment Pvt. Ltd. Director of the photography is Mrunal Desai and edited by Rikhav Desai. The film stars Veera Sathidar, Vivek Gomber, Geetanjali Kulkarni, Pradeep Joshi, Usha Bane, Shirish Pawar. The role of a filk singer has been portrayed by Shaheer Sambhaji Bhagat.

We wish best luck for Chaitanya and his team for this Oscar journey.