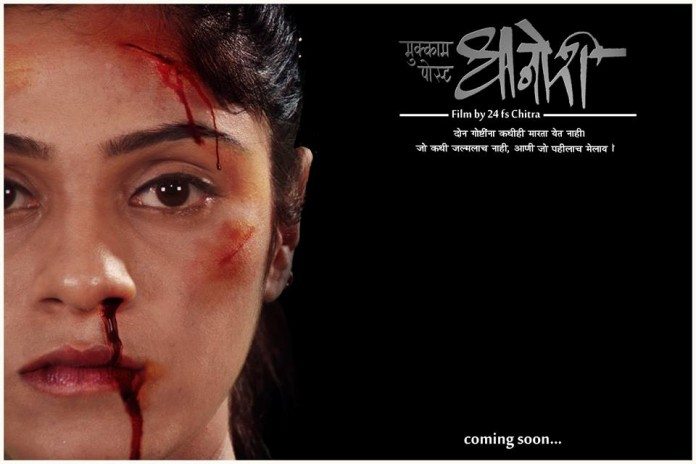 Q 1. You are originally from software background. It must have been hard to go in film business? What inspired you?
A – Films are becoming more and more technical. If one has passion for arts, coming from technical background is actually a bonus point. From sitting with DoP and going through technicalities of camera to understand compositions needed for special-effects shoot. Software background, particularly, helps a lot in post-production. So, it wasn’t too hard to enter this business from technical point of view. Arts side was covered by passion. We always had love for movies. We can say that coming from small village, only hero figure we get to follow is someone from movie. I mean, we learn martial arts from Jackie and we do push-ups to be like Arnold. But inspiration to make your own “mukkam post dhanori” is something totally different. Few of us used to discuss movies regularly and conclusion always used to be that Marathi movies somehow miss a dimension of action. Yes we have comedy and social elements all over the Marathi industry, but for action audience still have to turn to Bollywood or Hollywood. We debated on what is missing and finally decided to make our own.

Q2. So what is missing? And how you have tried to address it in “Mukkam Post Dhanori”?
A- “Will” mostly. May be since Bollywood is right next door and almost every Marathi person knows Hindi, repeating the same subject is like suicide. So there must be business reasons. And if you follow this logic, making movie with action-thriller as a theme becomes more challenging job. Now you are competing with big guys. So, we had to think through carefully as to not only what is missing in Marathi films, but what can be enriched in Hindi movies. Or more appropriately, how to be different. And that is main reason it took almost 2 years to come out with script. In “Mukkam Post Dhanori” we have achieved it mainly by presenting a powerful female protagonist in a twisted thriller story. There is 50% female audience in movie going population all across Maharashtra and yet we see that both Hindi and Marathi movies are unable to present a role model for this audience. Agreed, role models aren’t gender specific, we ourselves grew up watching Ripley (Aliens), Sarah Connor (Terminator) , (etc. But still there is very rare counterpart in Indian movies and we personally feel that it is failure of this industry.

Q3. Interesting, tell us more about this character? How you selected actress for it?
A – A child or female in a vulnerable situation creates more emotional response (from audience) than a mature male in same situation. That is reason, we see all Hollywood horror flicks, putting female as lead character. Also when male fights, it is mostly for moral or dominance. But a female has more appealing reason which is motherhood and connects with love towards weak. Our lead character “Pooja” follows the same path. She needs to be tender, loving, caring, feminine and yet very strong, both emotionally and physically. Naturally, finding such an actress was tough job. We took tons of auditions. And changed actress 3 times, with 2 of them we had shot one scene too. Our requirements were, best acting coupled with some martial arts experience and will to do whatever it takes which included rope climbing down the well, action stunts, crawling through trenches. Looks were secondary priority. But we were fortunate to find Niyati Ghate. One look at her and we were sure that we were looking at “Pooja”. Once she told that she grew up doing taekwondo, her fate was sealed. We selected her on the spot.

Q4. What about other characters? How is their interaction with Pooja?
A – The story is about 3 college kids, Pooja and her friends Ragu and Sameer, going to a remote village of Dhanori in search of an ancient treasure. While traveling they meet a run-away village couple, Ganu and Phulwa. All these characters are totally new. We selected these characters from same audition process. Now Ganu, Ankush Kane, has worked in some movies like “Salaam” and “Campus katta”, but “Mukkam Post Dhanori” is the first movie, all these actors acted in. While discussing story with reviewers, even the some well-known writers suggested that there should be a love triangle if we have one female and two male friends. But, we resisted the idea and kept the relation at pure friendship level. We feel young generation deserves to be looked upon as mature and open enough to handle relations properly. Since the story exists in current time, old concepts should not apply. The story has appeal for college kids, mature adults and will attract rural as well as urban class. Prakash Dhotre has done double role in this movie and Priya Gamre has performed a lavani song.

Q5. So there is Lavani in movie, are there more songs?
A – Yes there are 3 songs. Lavani is traditional “Baithi-lavni” sung by Bela Shende. We struggled hard to find lyrics for it. Seeing our frustration, our production Manager, Rajendra Kahire, took us to “Chafula” near Yavat village. We sat with recorder and a 60-70 year old lavani singer sang nearly 8 very old gems for us. We came back with bounty and Kumaar wrote excellent lyrics after selecting one lavani out of it. We presented lyrics to our Music Director, Yugandhar Deshmukh, and he did excellent composition for it. Bela Shende really loved the song and her beautiful voice has taken it to different level. We are sure audience is going to love the song, mainly because its origin is authentic and composition and voice is beautiful. Second song is a youth song. It is sung by Priyanka Barve, Mangesh Borgaonkar and Yugandhar Deshmukh. It is a travel song again written by Kumaar and is mainly oriented towards college kids. Thirds song is theme song of movie. It is mix of Bharud and rap, sung by Jasraj Joshi. Lyrics were written by Mahesh and Kummar. The purpose of song is to talk about real ghosts existing in our society. Saint Eknath had done excellent work using Bharud, for new generation we combined Bharud with Rap.

Q6. Ghosts? So is this a horror movie?
A – Hmmm we can say no, but yes there is concept of ghost in movie. We know that superstition is big thing in today’s world. Ghosts have no right to exist in age of reason. But movies are fantasies. Lord of Rings is all fantasy, now we cannot say it is propagating superstition. Dreaming and imagining is what makes us human. We think it is right to make ghosts and elves and angels in stories. How seriously audience should take it is another matter altogether. Having said all this, “Mukkam Post Dhanori” is action-thriller. Every character is well placed. Dialogues are meaningful and are accordance with today’s age of reason. In fact they have gone to extent of becoming bold about philosophical concepts. Lines between superstition, faith, morality, right and wrong are blurred by using dialogues. We think that compared to international cinema; Indian cinema has very simplistic dialogues. Simplicity makes it easier to propagate what story writer wants to say to every audience. But in this movie, dialogues are more meaningful and therefore not so simplistic. My personal opinion is that Indian audience is as intelligent, may be more, as his counterpart anywhere in world and therefore we as a dialogue writer, should not shy away from writing something that we want to say.

Q7. Do you think you are experimenting too much?
A – See, Marathi movies are already very rich. It has handled political dramas, social issues, comedy and now we see teenage love stories and some action oriented movies too. What “Mukkam Post Dhanori” is doing is introducing a new dimension to the industry. We are doing experiment, but it is in new area. For example, there is heavy use of special effects in this movie. Of course, we cannot match Hollywood with the budget we have. But, we have brought it to satisfactory level. To keep the cost low, we made use of college students, who worked on project out of passion. So “MPD” will be milestone in terms of special effects in Marathi movies. Action sequences are also taken in unique way. They are short, intense and convincing. So here also we dropped traditional approach to fight and adopted a more real-looking way. We are sure that “MPD” will make milestone here also and will be remembered for its action sequences. The background music is also nontraditional and beautifully used.

Q8. So what is it all about? What is theme of movie?
A – Pooja is an archaeological student, who has haunting past. She and her two friends go to remote village “Dhanori” to uncover a hidden treasure. So story follows friendship of 3 characters. But once in village, there is danger from all sides. Treasure has many secrets and many claims. Situation quickly becomes complicated and dangerous and it puts their friendship to test. And when an innocent love is trapped between all these circumstances. Everyone has to make a choice. All the characters are normal human beings. Only when situation becomes abnormal, the real character begins to come out. Some become Hero and some villain. So, it is twisted, dark and heroic story which cuts right through fabric of moral, blurring distinction between right and wrong.

Q9. Any last words?
A – Gandhi had said, be change that you want to see in the world. And we did exactly that, we made what we wanted to see in Marathi movies. We are thankful to all our team members and actors for their hard work. I will appeal to Audience to watch this movie. Think of it as movie of people, by people for people. Because we are audience and we turned to movie making because we wanted to see something more. Even for non-Marathi audience, movie will be very appealing. There will be English subtitles. Here is a promise from Indie Film maker, “we will rock you”. 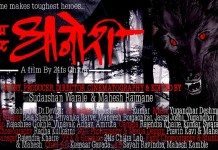 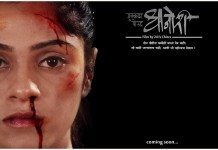 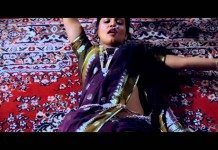 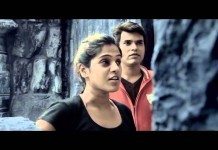