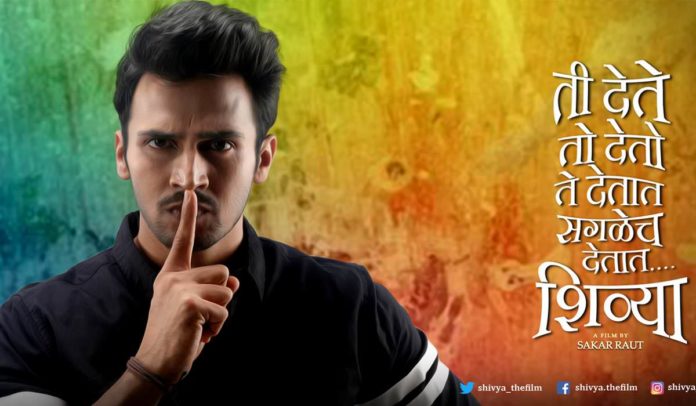 Shivya, a film by Sakar Raut is ready for the release. The title of the film is a bit different, and teasers have added curiosity for the audience. The film stars Bhushan Pradhan and Sanskruti Balgude in the lead roles. We have seen Bhushan and Sanskruti together in Pinjra (serial) and Nivadunga.

We spoke with Bhushan about his new film and his role. Here are some excerpts from this interview.

Bhushan, tell us about your role in Shivya.

I am playing role of Raghav, main protagonist of the film. This character has a bad habit of swearing and using bad words all the time. He is not an evil person, but his mouth always lands him in the trouble. He creates a bad impression with his swearing words even while calling his friend in the public. His personal and professional life is disturbed. One day, he decided that he will not use such words. What happens next will be seen in the film. I will not tell you much about it; otherwise we will miss the fun part. Playing this role was very entertaining for me.

Did the makers of the film face any problems with censor board due to such bad words?

Not as such. We have found a great solution to this problem in the second half which you have to see on the screen. The first half contains such words, but either we have used acceptable words which censor board has Okayed. This is not a  film for the children, as the subject is not appropriate for them. Yet, some words have been either muted out or beeped. It gives slight disturbance to the flow of the film. Apart from that, I don’t think there was any problem with the censor board.

You have done a serial and films with Sanskruti. How the experience has been?

As I have worked with her previously on small screen and big screen, there is a definite comfort between us.   We shot for this film and then did Nigvadunga. However, Nivadunga released first as this film’s post production took some time.We love working with each other. Comfort level and our friendship make our working even more interesting. We know how other person will react in front of the camera. This comfort level enhances our screen presence and chemistry.

This will be your second film with director Sakar Raut.

Yes, I have done “kalakar” with him earlier. It was his debut film as a director. We are growing as a team. We were newcomers by then, so we decided to make better films by learning and undoing our mistakes. Sakar trusts his actors and make them comfortable. He has a clear vision about what he wants to show on the screen. However, that does not mean that he will tell us exactly what to do. He will give a freedom to the actor and still get a perfect shot. This is one of those rare production houses which treat actors very professionally. Working with them is a great experience.   They have bettered there working style and made it more proficient. I prefer working with such people.

Marathi films are getting more awards in recent years. Do you think there is an increasing gap between “a film” for classes and masses?

No. Actually I think the gap is diminishing. We are making films which have a class and will make a good turnout at box office. We have always made great films, but unfortunately getting a theatre release for such films was our problem. See the example of films like Fandry. The film was critically acclaimed and won many national and international film festival awards. The film did very good at the box office. I am glad that such films are being made and released so that Marathi audience is growing in terms of visual arts. Audience is waiting for such films; I think this is surely a good sign for the audience.

Can you tell us more about your upcoming films?

My two films are ready for the release. One is Dadar Mumbai 28 where I am playing a major role. Tee aani itar is a film by Govind Nihlani, where I am working with Subodh Bhave, Sonali Kulkarni and Amruta Subhash. Recently I have completed a shoot with Prarthana for an untitled film. The post production for this film is going on and will be releasing in the second part of this year.

Apart from acting what are your hobbies?

Acting was my hobby, but I turned into a profession. I also like to watch English films. They have such fantastic day to day stories in their romantic comedies. Watching such film is a great stress buster for me.

Bhushan, Thanks for speaking with us. We wish all the best for your upcoming release and the future.