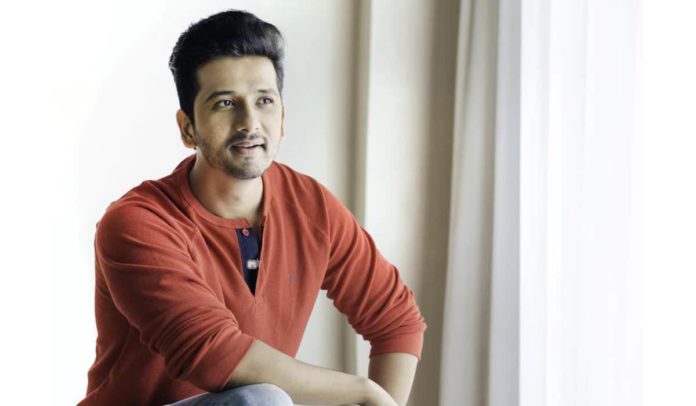 Abhijeet Khandkekar is a popular name in Marathi films and television and he also has acquired a reputation as a host of award shows and other events. Now his new film ‘Bhay’ is about to release and we got talking to him about his new outing. Here is what he said.

I play a schizophrenic patient called Gokul Joshi. He has a paranoidal condition and he sees things which are not there and hears voices which are not there. Gokul Joshi migrates from a small and peaceful town of Pune to the bustling metropolis of Mumbai with a hope for a better life. But that is not to be. Fast paced life of Mumbai, its sea of people, the vastness of its space – everything about the city begins to overwhelm Gokul. He is weak, vulnerable and susceptible to the smallest of things. The only thing he believes to be safe is the security chain of his tiny home and lives locked in the house for most time of the day. Until one day, when life decides to shake things up a little bit.

Did you do research to portray your role?

Yes. I studied a few patients and consulted a few doctors. In fact I had played such a patient in an one act play while in college which helped me to portray this role. I also acted on director Rahul Bhatankar’s instructions to give a different nuance to this role.

How was it like working with the rest of the cast and the director?

I was working with Smita Gondkar for the first time and it was a good experience. Also veteran actors like Uday Tikekar and Satish Rajwade were also a part of the cast and I got to learn a great deal from them. There was also Sanskruti Balgude who I had the pleasure of working. The director Rahul Bhatankar is an excellent editor also. This is his second film and he has done a fabulous job. He knows his craft very well, he knew about the shot takings and the shot divisions so well that the shots used to be taken very fast.

What about the songs?

There are three songs in the film and two have been picturized on me in the rich locales of Dubai. Such a location has been seen very less in Marathi films. There is also a montage sad song running in the background.

You are also doing a TV show on ZEE MARATHI . How do yo find time to do films?

Actually I had completed the shoot of Bhay , before  started work on the TV show ‘Mazya Navryachi Bayko‘ and so I am shooting 22 days a month for the TV show.

Do you find any differences between films and television as a medium?

Television is very strenuous and we have to complete many episodes in a day or two. Also, we have to remember what we have shot in the past and retain the graph of the character. In films, the canvas is wide and once it is printed it is there forever but television also gives you a lot of fame and money.

Who are the directors you would like to work with?

Satish Rajwade, Sachin Kundalkar, Ravi Jadhav, etc and there are so many.

I have a film called Priy coming up and also a film with Mahesh Manjrekar and Chandrakant Kulkarni called Dhyani Mani.