Make-up artist Vidaydhar Bhatte had a very crucial role to play with Vidya Balan being cast as Geeta Bali in the upcoming film Ekk Albela. He has been Vidya’s personal make-up man for a couple of films. Now, when the director of Ekk Albela – Shekhar Sartandel – was discussing who would play Geeta Bali, Vidyadhar Bhatte suggested the name of Vidya Balan. He sent her a text message and Balan immediately replied saying she is interested and would like to hear the narration. The narration impressed her and as she had also committed to the media of doing a Marathi film, she did not give a second thought about doing the role.

The striking resemblance of Mangesh Desai with the legendary Bhagwan Dada in the promos has everyone mighty impressed. So I had a brief talk with Vidyadhar Bhatte, the man behind making Mangesh Desai look like very much like a walking and talking Bhagwan Dada: 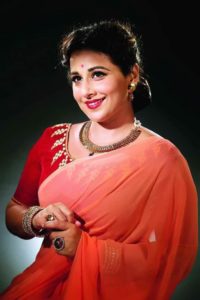 Can you tell us about the process of how you got around to making Mangesh Desai look like Bhagwan Dada?

Shekhar Sartandel once called me to discuss the look of the role. I met Mangesh for the first time there. I had a nice look at him and felt that it was possible. I had even seen Bhagwan Dada in real life once, so I was aware of the features of his face. Then we had a look test after a few weeks. Bhagwan Dada had rather silky hair and his forehead was also rather small. So I designed a wig accordingly and we did the look test. Everybody was happy with the look and that is how it was finalized.

Did you use any prosthetics?

No, we did not. Prosthetics affects the performance of the actor. It is difficult to emote with it. Also, as we were successful in getting the look without prosthetics itself, we thought why waste time and money on it. We used highlight and double shading for the look. Dada had a double chin, we got that made by using highlight.

How was the first response to the look?

When Mangesh came out of the make-up room, everybody present there including the DOP were shocked to see the similarity. They all felt that it was Bhagwan Dada himself. We clicked a few pictures of Mangesh in the look and showed it to people, they used to feel that it is Bhagwan Dada himself. So the look got immediate and generous appreciation.