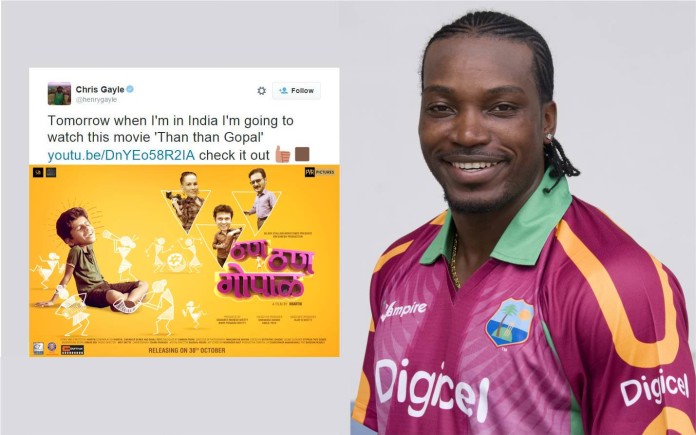 Chris Gayle, a smash-hit batsman from West Indies has announced on Twitter that he is planning to watch Marathi film Than Than Gopal very soon.

Tomorrow when I’m in India I’m going to watch this movie ‘Than than Gopal’ https://t.co/iu3TkucNCr check it out ????????

This is a pleasant surprise for Marathi film industry when an international cricket player has announced to watch an upcoming Marathi film with enthusiasm.

“Than Than Gopal” is directed by Mumbai-born Kartik Shetty. The plot of the film revolves around a blind eleven-year old boy who befriends a Warli painter, and how his life takes a turn. The film stars Milind Gunaji, Milind Gavli and Vivek Chabukswar in lead roles. The film also stars German actress Suzan Barnett in a very important role.
The film releases on 30 October all over Maharashtra.

Watch Official Trailer of Than Than Gopal :