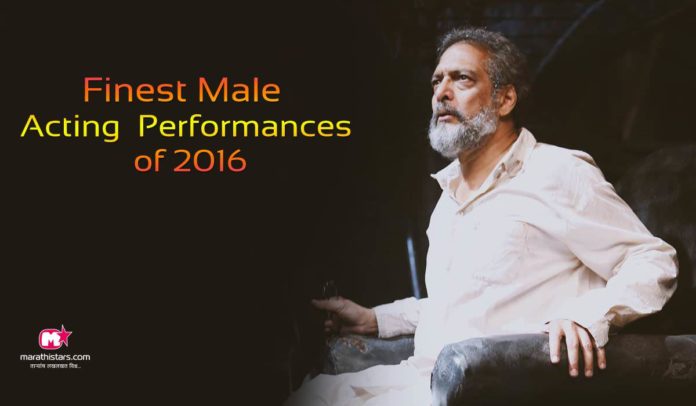 In 2016 we have had some hardcore emotional performances by young-old men! The definition of a ‘Man’ has been modified in recent times & many Marathi actors have portrayed this change in perspective & sensibilities effectively on the silver screen.

YZ was a complex film that talked on passion, friendship, romance, life & everything in between. Sagar Deshmukh as ‘Gajanan’ was a genuinely out of the box protagonist. First of all a lot of credit goes to the makers of ‘YZ’ who perfectly casted Sagar in this role. Throughout the film Sagar is natural & carries the whole film on his shoulders with ease. We would definitely want to see him more often in Marathi films now!

It’s a said rule that usually popular stage actors are not suited in films. But the king of Marathi theatre for over 2 decades, Prashant Damle proved this rule wrong. He was just as great on the screen as he is on the stage. He scores in the comic, eccentric part of the film but he is even better in the emotional scenes. His character ‘Detective Vyankatesh Bhonde’ has a fondness for dogs & has many heart touching scenes were Prashant Sir is seen taking care of them, talking with them & also saving their life!

Jitu Joshi is an actor who gives his 200% to every role that comes his way. And his role of ‘Prasanna’ from ‘Ventilator’ was perfectly tailor-made for him. A struggling political activist whose father is on ‘Ventilator’ & he has been put into a position to choose whether his father should stay on the ‘Ventialtor’ or not. It’s the most difficult choice for a son to make, even if he wasn’t his father’s favorite child. This conflict & moral confusion has been portrayed by Jitu with real panache! His eyes emote everything that goes on in Prasanna’s mind throughout the film!

The most loved acting performance of 2016 by all audiences. Nana played a sharp, satirical but equally theatrical version of Dr. Lagoo’s ‘Ganpat Belwalkar’. Many have written about all those beautiful philosophical, theatrical & poetic dialogues that Nana recites in the film, but we felt Nana is actually more fantastic in those normal scenes. He simply seems to be enjoying living this mythical celebrated role. Those scenes where he ridicules his son-in-law’s boss about plays & playwrights or those when he enters drunk at the party or his satirical conversations with friend & ex-competitor Vikram Gokhale!

Dr. Mohan Agashe is one of India’s most underrated actors. He has worked in countless great films in different languages & he has been actively part of theatre as well. His role of a Sanskrit scholar who slowly & steadily gets affected by Alzheimer’s disease in ‘Astu’ is one of his most accomplished performances ever. The transition of an intelligent, learned man into a child who has no memory & no understanding of ‘life as we know it’ is played with subtle brilliance by Agashe Sir. It’s sad that a film like ‘Astu’ & a performance like Agashe Sir’s had to be crowd funded to manage a release in theatres. Nevertheless, it’s a film that will stay forever as a film that questioned, analyzed our purpose & meaning of existence.