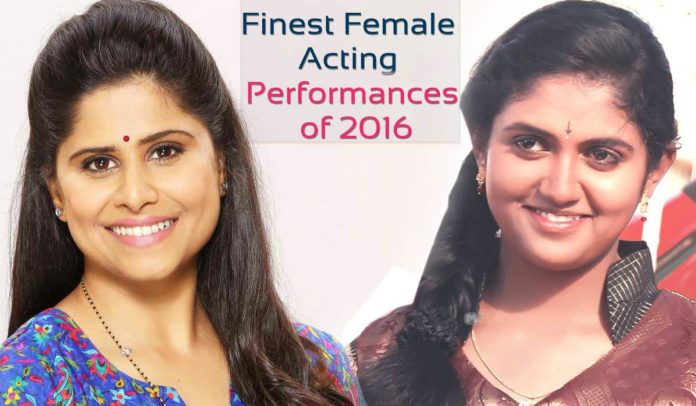 This year alike Bollywood, Marathi films too had a few women centric films like ‘Photocopy’ & ‘Vazandar’. Even in other popular films our actresses weren’t just pretty dolls, they were equally important in the narrative as their male counterparts. So it’s an exciting year to analyze 5 such important performances by our women!

‘Photocopy’ is basically one-woman show! Parna Pethe played double roles of twin sisters who are drastically different from each other. And Perna was drastically different in her portrayal of both the characters. At this age Parna is way ahead of her contemporaries & has the brightest future without a doubt. If you haven’t seen the film, watch it for Parna! Because she is her to stay & she is here to rule!

In 2016, Amruta Subhash entered Bollywood with two important films ‘Raman Raghav 2.0’ & ‘Island City’. For both of performances she has been praised by all the important critics in Bollywood. But back then it all started with ‘Astu’ when she bagged the National Award for Best Supporting Actress in 2013. ‘Astu’ was finally released substantially in 2016 & the audience got the opportunity to watch this award winning performance by Amruta. Even in limited screen time Amruta’s portrayal of an uneducated Kannada woman who considers an old man her son strikes a chord with us.

Sai Tamhankar had a terrific 2016. She starred in 4 important Marathi films; ‘YZ’, ‘Jaundya Na Balasaheb’, ‘Vazandar’ & ‘Family Katta’! She was flawless in all her performances & distinctly different in every role. We picked ‘Family Katta’ ahead of others as we felt it was her strongest & the most emotionally impactful performance. She played the role a girl who has married a man much older than her as she saw him as a father figure. This was awkward! But the way Sai strolled through the film it convinced us. We are extremely excited for Sai as we will soon be seeing her in an international film in 2017!

Vandana Gupte is one actress who represents strong womanhood. She is played many such roles which portray women aggressively yet the feminine side is always present. But her performance in Family Katta defines her as an actress & as a strong woman. A woman who believes in the feeling of togetherness & yet understands the changing times, she can hold her family together if she wishes to but doesn’t force them into anything, she can stay emotionally strong even when her husband dies but feels for her children who are miles away from each other on emotional grounds. Throughout the film Vandana Gupte literally lives her character & speaks more through eyes than dialogues.

Yes we have rated the ‘Sairat’ girl ‘Archi’ ahead of all seasoned actresses in this list. Though others are great, but Rinku was extra special as ‘Archi’! Even though she played a character much older than her real age, she was perfect in her performance. She has redefined the role of an heroine in love stories! In the first half of the film she is just too natural & gets through the proceedings with immense ease. Mind you we think that’s ‘ease’. But she must have worked really hard with Nagraj Manjule to make it look so effortless. And then in second half, her character graph changes so drastically! But Rinku fits the part even better now. Just as any seasoned actor Rinku emotes through her eyes. We are hoping that soon we can watch in a new film playing a new different character!