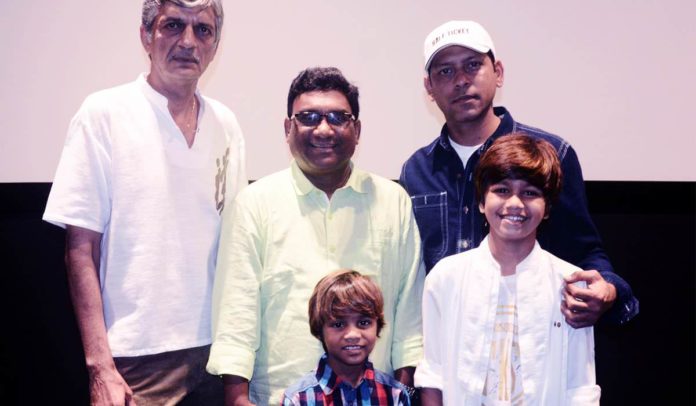 Kakka Muttai, the tamil film, that released a few years back, charmed nearly everyone who saw the film. It was a heart-warming story about a bunch of two kids from the slums and their aspiration of a better life. The film won a lot of accolades. But while seeing the film you could always sense that Mumbai will be a much better setting for the tale. So no wonder Foxstar that had produced the original have decided to give the remake the film in marathi and set it in Mumbai. Samit Kakkad who has directed films like Huppa Huyya and Aayna ka Baayna before is helming the project and Nanubhai Jaisinghani of Video Palace is producing it. The marathi dialogues have been written by Dnyanesh Zoting.

The film stars two kids in the lead role. Samit Kakkad auditioned nearly 400 kids for the roles. And the result is visible, as the casting seems perfect for the roles.

The camerawork by Sanjay Memane is singularly impressive from the teaser, and it certainly seems like an upgrade on the original. Memane has shot films like Shwaas before. Teaser gives you a glimpse of the numerous locations the film has been shot at. It is a Mumbai that hasn’t been seen before.

The melodious background score by GV Prakash also takes the film to a higher plane.

The song ‘Chal Chal’ has also been shot in a spectacular manner and gives us a glimpse in the life of a pair of slum kids. The melodious tune has been worded by some thoughtful lyrics by Kshitij Patwardhan.