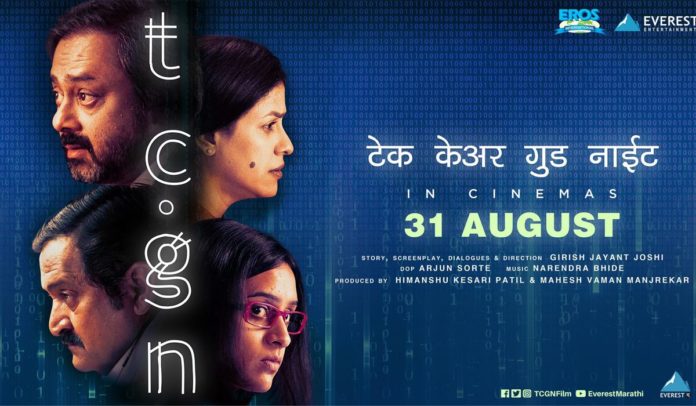 Our recent films involving youth have made genuine efforts to figure out how exactly should we portray teenage-early 20s youth in our films. The communication gap between these youth & their parents has been a common theme of some recent Marathi films & successfully these films have managed to make their points. Take Care Good Night too belongs to this type. It succeeds in cracking the ‘gap’ part & the perspective of the parents but when it comes figuring out the youth, it only scratches the surface & nothing from beneath comes out.

The film builds up the conflict very effectively (even with the errors) in the first half & continues even better in the beginning of the second half, but at a sudden point we are welcomed by some interesting humour. We don’t mind it. Mahesh Manjrekar as the cyber cell cop is adorable from the word go & the tongue & cheek humour goes well with his character. The problem arises when the film itself deals with the conflict in a casual manner disregarding the seriousness it maintained from the beginning. This sudden change of tone & the abrupt conflict resolution affects the overall film adversely. The well known ‘second half syndrome’ most of the times concerns the conflict resolution as it does in this case.

However there are lots of things that work in favour of the film & are new to our audiences. The film has great potential to work with the modern day urban families as it will be extremely relatable, both from the lifestyle, cultural identification factor to the idea of a sudden financial crisis. The casualness or ease with which the conflict is resolved & the way it is looked at in hindsight by the characters harms the film. If that issue wasn’t there ‘Take Care Good Night’ could have been one of the must watch Marathi films of the year.

Girish Joshi is one of the seasoned & respected Marathi writers around. His direction too is smooth. There was certainly more scope to portray the youth characters in more depth & breaking the shackles that they are put in usually by our films. The performances are fine from the ensemble cast. After having a terrific 2017, Sachin Khedekar has created an aura around him of being exceptionally good & subtly perfect. This performance might not stand out as one of his bests but still he is very good. In the beginning we don’t find his performance believable but quickly he convinces us that this person exists. Irawati Harshe has a lot of screen time but doesn’t really get moments to shine, her character remains slightly lesser important. Mahesh Manjrekar & Perna Pethe stand out as the real performers who impress! Manjrekar was last seen as a cop in ‘Rege’, here he is equally effective yet completely different! Adinath Kothare too fits the character & does good job.

‘Take Care Good Night’ definitely deserves one watch from our audiences most importantly for understanding what the film has to say. Today’s parents have to understand the need of communication & so does today’s youth & of course for the cyber crime issue.