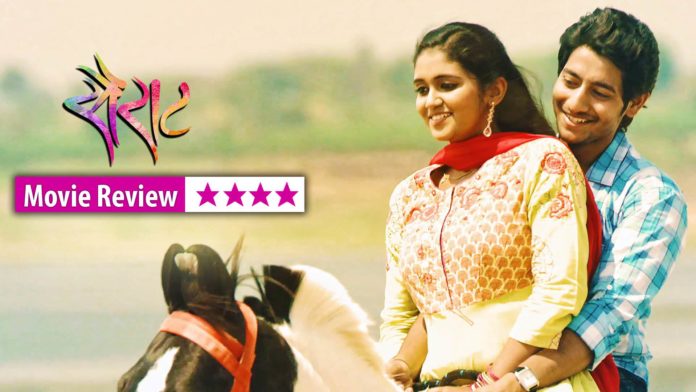 Nagraj Manjule’s Fandry, that released a few years back,made ripples in the cinema world. There has seldom been such unabashed critique of the caste system of the country. The film certainlyshook up the Indian public. It also made people sit up and take notice of a new voice in the form of Nagraj Manjule’s directorial capabilities that had emerged in Marathi cinema. This new voice not only had something unsettling and relevant to say, but also knew how to say it to make the maximum impact. Manjule’s latest film Sairat that has been solidly backed by Zee, also lays bare the monster that is the hierarchical caste system, but is different in its approach than his debut feature film. Fandry had an arthouse aesthetic, but Sairat is certainly more mainstream, but with no less impact.

There is nothing very novel in the basic plot of the film. It is a spin-off on theepic love stories like that of Romeo – Juliet,but with a caste angle. Instead of two warring families we here have the big wall of the caste system that the two star crossed lovers have had the courage to climb. After all these years I don’t really think most people go to the movies just to see the stories unfold; it is more about how you are saying whatever that you want to say, that matters. Quite a few marathi films these days take up fresh and unexplored subjects, but the execution is most of the times not upto the mark. Nagraj Manjule, however, clearly knows how to tell his storymaking Sairat a nearly 3 hour saga that hardly leaves you off the hook in its entire duration.

Sairat has contrasting halves. The first half more ‘filmy’, the second half more serious. However, in the first half also the proceedings never really get too unrealistic. Mani Ratnam is one director I totally adore and it is a joy to watch how people fall in love in his films. Despite being slightly ‘filmy’, given that his films are very much mainstream, the courtship in his films are always charming and come across as convincing. One of the ways Ratnam manages this is by expertly using songs in his films. There hardly might be another director in the history of Indian cinema who used the quintessential song and dance sequence to better effect than him.The first half of Sairat reminds of Ratnam in that way and this coming from a Mani Ratnam fan like me is certainly one of the biggest compliments I can give to a director. All of the four songs of Ajay-Atul’s high quality album are used in the first half and they go a long way in making it a breezy affair. There is also a particularly fantastic long drawn sequence of exchanging love letter that surprises us with how good a mainstream filmmaker Nagraj Manjule is. 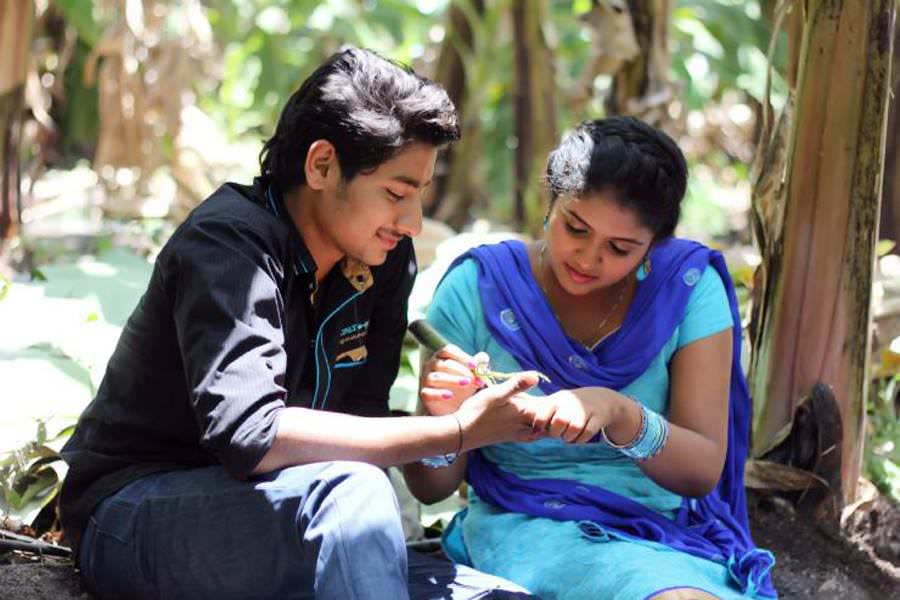 But the second half of the film becomes more like a social drama and the romantic and thriller elements are left behind. The background score (a little too loud) that was omnipresent in the first half is almost absent. At the interval point you wonder where the film is going as that is where most of our mainstream films end. But Sairat is a mainstream film with a difference. It is clear from the second half Nagraj Manjule isn’t satisfied with just telling a love story, he wants to make a comment on the social structures of our society and if you have been in touch with the current affairs of our country you can predict where this story is going.

Though the film as a whole is an indictment of the caste system, the criticism here as the plot unfolds isn’t as direct as it was in Fandry; it is buried within the love story. But what is quite apparent and one of the most fascinating things about Sairat is how the gender conventions that are deeply etched in the mainstream cinema of our country are reversed. Here we have the heroine unabashedly staring at the guy, till he gets uncomfortable; she is the one who says ‘I love you’ first; she is the one who takes the initiative in inviting the guy for a few private moments in farms; she is the one who saves the hero from the goons wielding a gun, no less; the guy is the one who serves tea to his in-laws the first time they have a conversation. Also contrary to most films the hero here is a slim, fair and pretty boy. The girl on the other hand is anything but conventionally beautiful, but by the end of the film she has completely won you over. All this seems like a condemnation of both, the Indian society which is steeped in patriarchy and the mainstream cinema of our country that imitates the patriarchal notions and other social evils of our society. 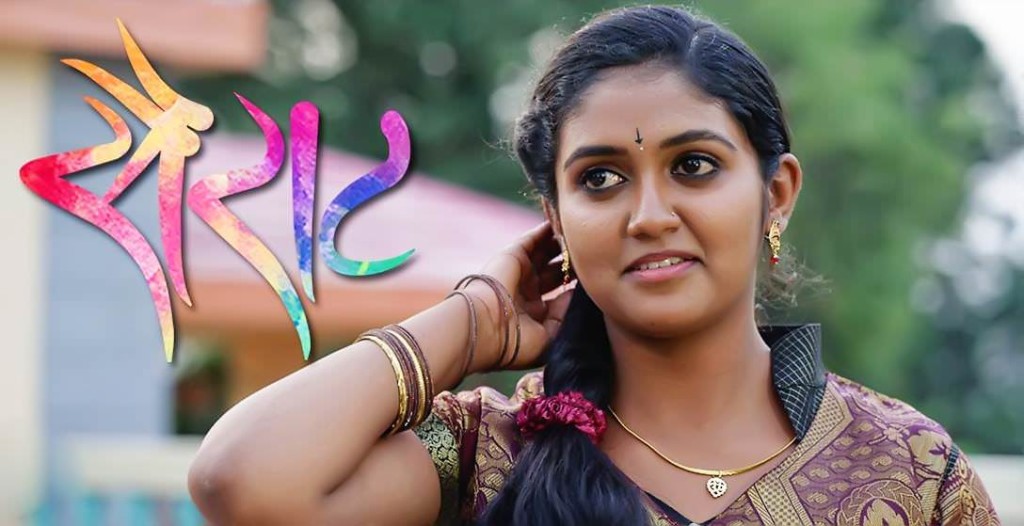 The above must have made it apparent that Archi, the heroine of the film, is no pushover. Daughter of the Patil (landlord) of the village, a bold and commanding attitude comes naturally to her. And Rinku Rajguru as Archi is a casting masterstroke. Nagraj Manjule has the knack of extracting solid performances from non-actors as was apparent from Fandry and he does this with Sairat as well. Archi is a fairly complex role and she effortlessly brings about all the varied emotions – right from arrogance to despair – that her character goes through. Aakash on the other hand doesn’t match up to Rinku but is quite adequate for his role which is less complex than that of Archi.

Another notable aspect about Sairat is that despite the mainstream aesthetic the film is not devoid of metaphors. We are repeatedly shown Parshya ‘taking the plunge’ into a well or the lake. In the latter half of the film there is a close up on the feet of Archi as she is climbing down the steps to a public toilet. It succinctly depicts how Archi born and brought up in a bungalow named after her has descended from her upper-class upbringing. The song ‘Jhingat’ has Archi dancing in a balcony and Parshya on the ground with him expressing his love for her in the song. Apart from underlining their social status with her being high up, it also comes across as a tribute to the ‘balcony scene’ from Romeo and Juliet. One more scene that has the most obvious and impactful metaphorical meaning is when Archi and Parshya have climbed up on a dead tree. Here, Archi urges the dalit Parshyato climb higher but he replies by saying the higher branch won’t be able to carry me and might break down. Despite being a bit contrived, the whole metaphor of the tree being the millennia old caste system that will break down if the dalit Parshya climbs on to the highest branch was not at all lost on me.

Sairat is a long film. A 170 minutes film for today’s times is certainly very long. But barring a few instances like the chase sequence in the first half, you don’t really feel the film drags at all. Nagraj Manjule packed a punch with a arthouse film like Fandry. But Sairat goes to show what a good mainstream director Nagraj Manjule is that his film holds your attention all throughout. But it is the end which makes you doff your hat to the man. After the masterfully directed last scene of the film is over you realize that the long duration and the playful nearly filmy romance of the first half was so crucial to the film. Without them you wouldn’t have connected with the characters as much and lasting impact even after the film was over would have not been as sharp.

Sairat is an epic love story told in a highly affecting manner, filled with solid performances, great songs and an assured hand in direction. That Nagraj Manjule is a director who can also make a deeply touching mainstream romantic film is loud and clear!