A film about the ideologies and teachings of an inspirational personality, who has a Godly status among his followers, should ideally be a soul-stirring affair. If not this, it should at least be filled with moments that touch you.

Director Atul Kale’s Balkadu has such instances but they are only few and far between. The film overall turns out to be a wannabe type due to some weak writing and execution. It also bears striking similarities with Mahesh Manjrekar’s Mee Shivajiraje Bhosale Boltoy.

The story revolves around Balkrushna Patil (Umesh Kamat), who is a school teacher staying in Mumbai’s Nala Sopara. His professional and personal life, including his relation with his childhood sweetheart Sai (Neha Pendse), is far from perfect.

As he teaches History, he starts suffering from a condition where he hears voices of historical personalities. Among these voices, the most prominent one is that of the late Shiv Sena Supremo Balasaheb Thackeray. At the same time, Balkrushna’s heart bleeds to see the condition of Marathi people in Mumbai. Will Thackeray’s guidance turn out to be an inspiration for him? 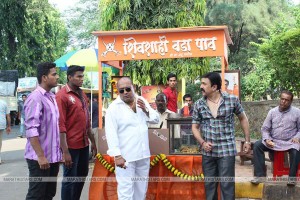 Balkadu’s motto is to spread Thackeray’s message for his followers to fight for their rights. But the primary objective of every film is to tell an interesting tale and this is where it falters. The biggest weakness here is the writing. There is hardly any story in the first half. This ensures a screenplay with errors and without any flow.

Things remain the same post-interval. The protagonist’s manner of enlightening and the way the revolution spreads is unconvincing and, at times, unintentionally hilarious. His idea of Marathis moving from the outskirts of Mumbai into the heart of the city is also impractical. Due to these issues, the inspirational message, barring few moments, hardly has any effect on you, especially the speeches, which appear corny.

Another worrisome aspect is the justification given for vandalism. Also, abhorring the idea of Marathi girls marrying non-Marathi guys is regressive in today’s era.

From the music, the Powada song is the only impressive number. But it is quite funny to see a teacher singing and dancing to such a song while teaching history. The camerawork falls in the good category while the background music is too loud.

Apart from some genuinely funny moments, it is Umesh Kamat’s performance that keeps the film going. He gets his act right by portraying various emotions with ease. Prasad Oak is highly convincing as the bad guy. Neha Pendse isn’t bad. As Balkrushna’s mother, Supriya Pathare provides an entertaining act. The actor playing the channel head is average. Anand Ingale is likable while Tiku Talsania is over-the-top. Pushkar Shrotri impresses in a cameo.

Balkadu doesn’t create the desired effect due to various issues. The film stands some chance at the box office due to the hype.