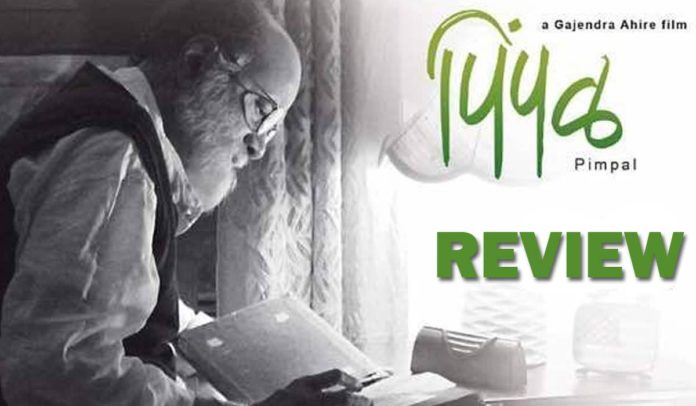 Gajendra Ahire directorial ‘Pimpal’ is one of his rare movies that understands the power of minimalism & inhibits it in & out. Running around one & a half hours, ‘Pimpal’ has a very specific world & an organic structure that doesn’t follow any norms of conventional storytelling usually seen in our films.

Dilip Prabhawalkar plays an old retired man living alone with some assistance from his cook (Kishore Kadam) & his doctor (Priya Bapat). The actual people in his life are probably only these two! But in a virtual world, he is connected to his two sons & their family including grandsons & a granddaughter almost on daily basis. His sons, daughters-in-law & grandchildren all of them seem genuinely interested in the old man through their regular video chats.

There are no distinct caricaturish features assigned to this old man, which makes him more believable! Even Priya Bapat’s character isn’t created like a make-believe movie character, to some extent we feel to be at distant from her real self, which again works for the film. At first, we are allowed to wonder what the film is actually about! Slowly we get into the actual soul of the film.

That soul too is minimalistic just as the approach to the overall making of the film. We have many times heard that it’s depressing for a single old person to survive once he/she loses their life partner. This film goes deep into this feeling, it’s not depressing, neither is it pleasant. It’s a bit of both! It’s a lot like being in love! A bittersweet feeling as they call it! This loneliness is more on the sub-conscious level than in physicality. How can an old man who has a loving family eagerly waiting for his arrival be lonely? One could ask this question? That’s the point in physicality (which also includes the virtual world) he isn’t alone, but in his conscience, he misses the life he had, he misses his wife, he regrets how he couldn’t live his life at it’s fullest when she was with him!

The film doesn’t really have a strategically constructed ‘story’. It just dwells on certain real human feelings & probably the most peacefully lonesome phase in a person’s life. It uses the medium of cinema in actualizing this lonesome atmosphere & we can experience the same through our senses in a cinema hall. Provided we open up our senses & look beyond a ‘story’ & a conventional idea of ‘entertainment’.

This is Dilip Prabhawalkar’s finest performance in a long long time! You couldn’t have anyone else in his part. He is tailor-made for the role & for the film. Priya Bapat too explores a new side of her in the film! Kishore Kadam gels well in the film too. Gajendra Ahire is a passionate Marathi filmmaker who has a habit of disregarding the technical aspects of the medium many times. But here since the film had a minimalist need in every way he has managed to make the film just about perfect in every way. His biggest achievement here is that he has captured the feeling of loneliness through image, sound & the overall atmosphere he creates in the film!

In a way, it works cathartically for those who regret their life decisions & wish they could have given more time to themselves & their loved ones.

‘Pimpal’ is a must watch for those who love thought provoking simplistic films! While there are too many options in the theatres currently (including Marathi) ‘Pimpal’ is a clear stand out amongst all of them as it can give some peace of mind to the audiences in the midst of all chaos we are in right now.