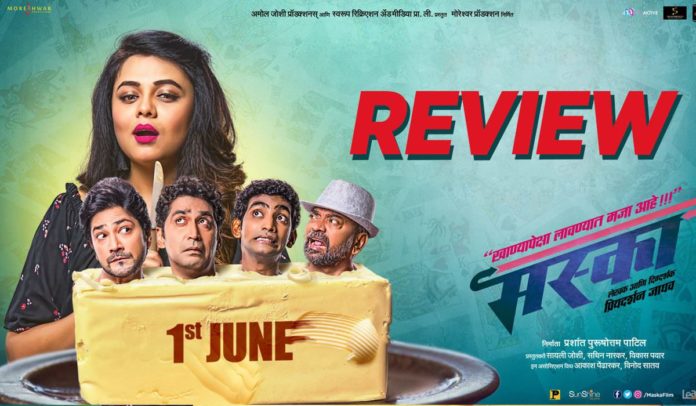 What exactly is situational comedy? It is that kind of comedy that is comedy for the audiences but not for the characters involved in the situation. Now this kind of situational comedy is mostly known to us in Marathi cinema through stories based in a rural backdrop. We have fewer films in this type based in cities. Add to that the theme of ‘Con’ movies. ‘Maska’ is a blend of these three; an urban situational con comedy!

The biggest strength of Maska is not in it’s genres or even the basic story of the film. The strength lies in the little detailing, many moments that are so new to look at. Throughout, the film doesn’t miss a single beat. It feels like a perfectly choreographed stage performance that just flows like ‘Maska’! Aniket Vishwasrao has been introduced to us as the victim in this ‘con’. There’s very little that we know about him, he’s just the plain normal rich guy. And the film didn’t need any more depth in his characterization too! As revealed in the promotions Shashank Shende, Prarthana Behere & Pranav Raorane are a team of con artists. There’s an inherent chemistry between these three. And then there is Chinmay Mandlekar who enters later in the scheme of things.

Just like in thrillers, in situational comedies like these when the narrative slowly keeps moving ahead, there’s a need of ‘tension’. This tension is what brings the audiences to the edge of the seat. And ‘Maska’ has that throughout. You are skeptical about the characters, you anticipate them to lose their patients & you also feel their restlessness within you! And during this whole tension ‘Maska’ has atom bombs of humour! Pure unadulterated situational humour! Such films can’t afford to involve the audiences emotionally, so very smartly ‘Maska’ avoids that throughout. We need the emotional objectivity to enjoy this kind of films!

All of these little decisions & additions should be credited to the director of the film Priyadarshan Jadhav. And this film is completely a showcase for him as a writer & director! A slight madness is essential to come up with a film like ‘Maska’. Priyadarshan Jadhav always seemed to have that, and here because of complete creative control he has finally unleashed it! There’s only one subjective drawback in the film. The end is a bit predictable, it could have been something crazier or totally out of the box. But that is something only obsessive film watchers like me would feel. For the general audiences it won’t really be predictable, hence very subjective!

There are two different levels or styles of performances in the film. One that is subtle, to the point & a bit underplayed, Prarthana & Aniket Vishwasrao are in that mode & both of them are at their very best! Then there’s slightly more expressive style in which Shashank Shende & Pranav Raorane develop a terrific give & take generating countless humorous moments, while Chinmay Mandlekar’s performance just feels slightly more animated in some scenes but even he has this one terrific ‘bar’ scene with Aniket Vishwasrao! Again half the credit for these performances goes to Priyadarshan for synchronizing them together & creating a symphony out of it.

‘Maska’ throughout the narrative never takes itself seriously. It’s a ‘genre’ film, one that should be distant from reality (though it’s based on reality) or the seriousness of reality to be specific. Quite a few recent Marathi films in my memory just mindlessly became serious at some point & started giving a moral lesson to the audiences. Honestly there’s nothing more off putting in a ‘genre’ film than this social conscience.

‘Maska’ should not be missed! It’s pure, mad entertainment, the best kind of escapism & it doesn’t insult your intelligence even once!