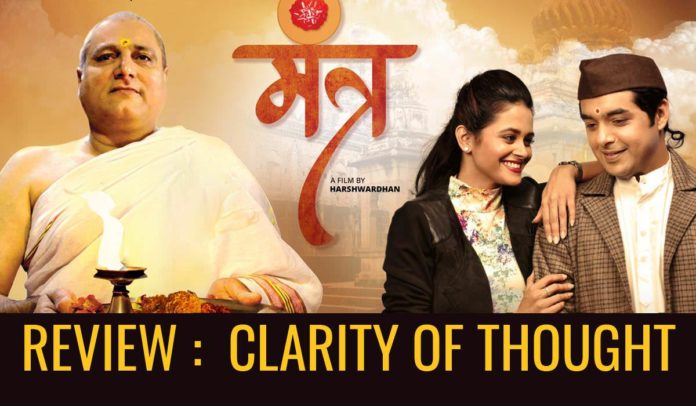 Mantra is a film that is weaker in craft & technique at many instances but the lasting impression it makes purely on what it wants to say & how clearly & confidently it says it overpowers it’s weakness when looked in totality, having said that the message or the philosophy that the film abides by could have been organically imbibed into the screenplay of the film.

The film begins with flashback hinting us that something drastic has happened in the life of the protagonist. While in most of recent Marathi films the use of flashback isn’t really justified, here it makes sense & makes us connect with the protagonist. Niranjan (Saurabh Gogate) belonging to a ‘purohit’ family is all set for his CA preparations, his father (Manoj Joshi) & his elder brother (Pushkaraj Chirputkar) aren’t unhappy with his decision of not taking up the ‘purohit’ work. But soon an opportunity lands up in the family which requires one of the priests from within the family (which also includes Niranjan’s uncle) to shift to Germany at a temple that requires a priest.

The elder brother has an inferiority complex about English or any foreign language & culture, he isn’t ready to move to Germany. This uncle is already interested but then Niranjan shows interest & since the requirement was of a young (& a physically fit person to adapt easily to the climate) priest, Niranjan’s father Shridhar Pant approves him! But only after confronting him about his sudden change of plan!

Now majority of the film’s ‘point’ relies on the characterization of ‘Shridhar Pant’ his values, his calmness & his studios nature about religion & spirituality. He is almost a ‘Gandhi-like’ figure of this field. Is he believable? To me he was! No matter how rare, there are people like him in all facets of life! People who are honest in their work & who search for ‘satisfaction’ in every little deed they do. Manoj Joshi gets to play an exact opposite version of a priest from what he played in ‘Dashkriya’! And he is very much effective here!

Moving onto Niranjan, he has enrolled into a German speaking class every evening accompanied by his best friend ‘Sunny’ (Shubhankar Ekbote), son of a politician. In the morning under his father’s guidance Niranjan is learning all the rituals which he needs to be aware of to function as a priest in Germany. Now enters the female lead of the film, Antara Joshi played by Deepti Devi, (she too is in the German speaking class) a hardcore atheist who has just got over a break up. Now Antara is a progressive modern day woman who smokes cigarettes, & has blacklisted every religion, religious practices, etc as she had been through a tragedy! Well, Antara is just as cliché as she could be, yet there’s a moment in the film in the climax where she becomes more than just a caricature & makes a healthy contribution in making the ‘point’ of the film.

While I can’t reveal what the film says about theism vs atheism or what it’s point is regarding ‘religion’ & the people who practice it professionally like the mentioned priests, I would still say that the film says something very fundamental! The purpose of religion & the idea of god had a fundamental purpose in our lives, one that gives us inner peace & is very much personal. But does the film say that religion is irreplaceable? Or it says that it’s all up to us? That’s for you to know!

‘Mantra’ could have trimmed it’s length a bit, avoiding few scenes set in the German speaking class or from the Niranjan-Sunny track. The film could have been dubbed better. At many instances it’s evident that we are not hearing the actual voice from the scene. Sparing these flaws ‘Mantra’ needs to be seen in today’s religiously polluted atmosphere to find some clarity about the subject & it’s practical influence on our lives.